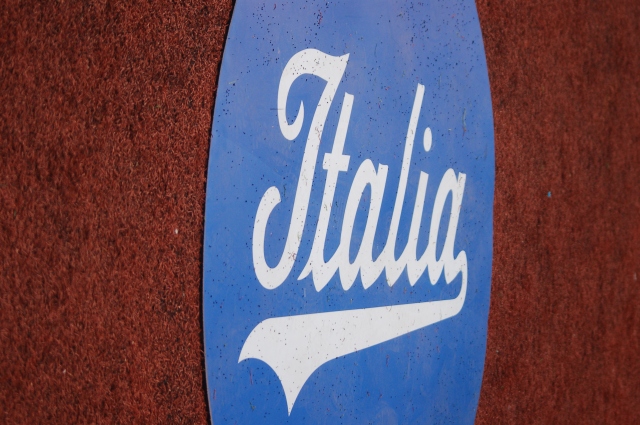 Over the winter, we broke the news that Mark Teahen was coming out of retirement to play in Italy  (link), and over the course of the season, we have offered regular updates of his season with Padova (link). Teahen, though, is not the only noteworthy player in the Italian Baseball League (IBL), as several veterans are plying their trade, along with some younger players looking to get their careers back on track. Earlier this season, we gave updates on some of the more notable players, including players making bids for Pitcher and Player of the Year (link). With the regular season concluding last weekend, we review their efforts to date.

The star import for the 2017 IBL season was expected to be Teahen, arguably the most famous former big leaguer to play in the country, with previous top notables including Rick Waits, Josh Phelps, and Roger Cedeno. Teahen was joined by other veterans, but it was former Red Sox prospect Ronald Bermudez who made the most impact.

Bermudez is an MVP candidate after a regular season in which he hit .403, third-best in Italy’s top circuit. The outfielder, who recently turned 29, was in the league’s top three in hits (54, four fewer that Osman Marval), total bases (75, third), and steals (11, tied for second). Bermudez’ slugging percentage (.560) and OPS (1.003) were fourth.

Though he never made it to the majors, Bermudez was Boston’s 2007 Latin Programme Player of the Year and was a 2010 South Atlantic League All-Star. Out of affiliated ball since 2014 despite a .270 minor league average and solid tools, his efforts in propelling Angel Service Nettuno to the playoffs will almost certainly get him another shot in the States. So too, will his consistent approach, which saw him hitting .384 at the season’s midway point.

Another former prospect, this time in the Pirates’ system, was also a top player in Italy this year. Rudy Owens was listed as a top-10 organisational prospect in the Pirates’ system in 2009 and 2010 and dubbed as having the ‘Best Control’ among their prospects. Owens made his MLB debut in 2014 for the Astros, taking a loss in his only start. After five seasons in Triple-A, the southpaw landed in the independent circuit in 2016, striking out a batter per inning in 11 starts, but his 4.01 ERA did not attract any major league suitors and he headed to the Chinese Professional Baseball League in Taiwan.

When we last checked in on Owens, he was easily the top starter in the IBL with a 0.31 ERA and the lead in three other categories. After a difficult span in June, during which he pitched both league games and in the European Cup, the lefty finished on another good run. His Fortitudo Bologna 1953 club won the IBL thanks, in part, to his efforts, which included a 2.73 ERA and a 7-3 record.

Owens had to leave Bologna with two weeks left in the season due to a university commitment (outlined here), but led Italy’s top league in strikeout-to-walk ratio (5.69, 1.65 ahead of second-place Carlos Quevedo) and was fifth in strikeouts per nine innings (10.09, with Jonathan Aristil in first at 12.64) and wins. There is no word on whether Owens will retire or is merely finishing his degree.

Owens’ replacement was Jared Lansford, who pitched in Taiwan during the 2015 and 2016 seasons, tying for the lead league in wins in the former (16). We detailed his career and signing, just in time for him to make a start in the season’s final weekend (link). The righty tuned up for the playoffs with a scoreless three-inning start, striking out two and allowing three baserunners.

Jose Castillo, who broke into the big leagues at 23 with the Pirates, joined Parmaclima Parma two weeks later. Castillo played regular for five years in the majors and totalled a .254/.296/.379 line while appearing at second, short, and third. Now 36, Castillo had only a .238 average for Parma, but hit .364 with runners in scoring position and had five two-out RBI, earning a reputation for clutch hitting.

A final veteran, Fernando Nieve, joined T&A San Marino for the playoffs. The righthanded reliever had a 4.61 ERA in 99 MLB games between 2006-2010, but more recently this season had a 45-to-6 strikeout-to-walk ratio in 32 innings in the Mexican League. In Game One of the IBL semi-finals, he hurled two shutout frames, striking out four.

There were several notable relievers in the last update, all of whom were struggling at the time. Castillo’s Parma also featured flame-throwing Eduardo Sanchez, the 2009 Cardinals’ Minor League Pitcher of the Year. He spent much of 2011 in St. Louis, earning five saves and compiling a 1.80 ERA in 30 innings. Despite a career minor league ERA of 3.53 and high strikeout rate, Sánchez had been out of affiliated ball for two seasons. When we last checked in, he had a 7.59 ERA and 2.25 WHIP in 10 2/3 frames, and that is where his ledger stops for the year.

Jose Ascanio is another former major league reliever, like Sánchez, who could never quite harness his stuff well enough to stick in the bigs. Developed by the Braves, he made his debut at age 22 in 2007, pitching in 13 games. He earned similar callups in three of the next four campaigns, but his career ERA was 5.28, though he struck out 8.0 batter per nine. Ascanio did not succeed this year in becoming a vital member of the San Marino bullpen, but struck out 17 in 13 2/3, walking four. The righthander had a 4.61 ERA in only 12 games.

Though he never made it out of the low minors, Carlos Rodríguez was a promising lefthander in the Cubs’ system, compiling a 2.84 ERA, 1.12 WHIP, and 9.0 K/9 in four rookie league campaigns. Only 21, Rodríguez was, no doubt, attempting to follow the path of Jason Simontacchi and Javier Guerra and restart his career with a stint in Italy, but was 0-3 with a 6.16 ERA at our last glance. Though he recovered slightly after a very rocky start, the left-hander had a tough season with Padule, the IBL’s newest club.

This brings us to Mark Teahen. Extra Innings has followed the former Royals’ star throughout the season, with a stream of updates on his exploits (link). The results have been mixed, though Teahen certainly looked more comfortable as the season went on.

Playing for Tommasin Padova, which finished a woeful 10-24, Teahen led the Italian Baseball circuit with 29 walks and, at one point, took a free pass in 10 straight games. Batting .194 after 12 games, Teahen raised his final average to .211 and hit two home runs in the season’s second half, but the resulting .211/.379/.321 line was far from what the Paduan club wanted.

Teahen did play third base regularly after the first few games of the season and was more than respectable, accruing a 4.11 range factor after moving to the hot corner. Handling well above the normal number of chances, Teahen finished with a .939 fielding percentage there, participating in 10 double plays.

We will check in for one final glance at the above group after the IBL playoffs are over, but this may be our farewell to Teahen, who was considering a second season when we spoke to him earlier this year (link to interview). If you’re curious about baseball in Italy, we have compiled a map of the teams at all four levels of organised play here. Baseball Mania and Mister Baseball offer game recaps and other news.