Jansen on Baseball in Curaçao: “I Never Stop Helping”

First in a series of World Baseball Classic retrospectives.

LOS ANGELES – Kenley Jansen has had more signature moments on the world stage than most, getting the final out in the 2016 All-Star Game, setting the Dodgers’ all-time saves record, and showing off an electric arm as a catcher for the Netherlands in the 2009 World Baseball Classic. In this WBC, the righthander needed only nine pitches to pitch a scoreless ninth in the Netherlands’ semi-final against Puerto Rico.

The Dutch ultimately lost the game in 11 innings, but inched closer mato their first Classic championship game after being eliminated in the penultimate game of 2013. A night earlier, Jansen picked up his first save of the 2017 campaign for the Dodgers, but we spoke to him about his WBC experience as the first in our series of World Baseball Classic retrospectives. Jansen opened up about the harsh realities of baseball in Curaçao, while lauding the For those who prefer to listen along, the audio is on our Soundcloud.

Gabriel Fidler: This is Gabriel Fidler here with Extra Innings, and we’re going to follow up on some of the things we discussed after the Netherlands’ really heart-breaking loss against Puerto Rico in the World Baseball Classic semi-finals and I wanted to talk some about the WBC and some about Curaçao in the next couple minutes.

Have you talked, Kenley, with other members of the Dutch team since the World Baseball Classic and what sorts of things have you talked about?
Kenley Jansen: Actually, no, I didn’t talk to [anyone], I just hung out with Profar quite a few times in the WBC, but that’s pretty much it. I’m just trying to focus here on my season with the Dodgers, it’s my number one priority and what I’m focussing on.

GF: Do you think there’s a sense of disappointment with any of the Dutch players or does everything on the team feel like “Hey, we came an out away from doing it and we just need four more years and we’ll be ready?”
KJ: I don’t think it’s disappointment and you just can’t take credit off Puerto Rico. Puerto Rico was one of the hottest teams in the Baseball Classic and for us, we made a few mistakes, and that cost us our game, but we played a terrific game and we gotta be proud of ourselves that we got back again to the final four. That says a lot. We just gotta keep competing. 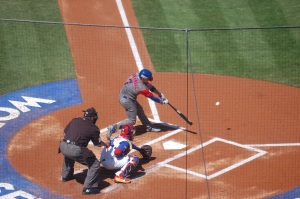 GF: You share a clubhouse with an opponent from that semi-final in Kiké Hernández. Have you talked about that semi-final game and had a bit of rivalry over that game?
KJ: Well, I didn’t talk a lot with Kiké because he’s having a good time playing for his country, same with me, I’m having a good time, it was great. It was a great moment, a great feeling, and I’m glad that I played.

GF: You told me after the semis that you played in some games in the Netherlands in 2009, which I wasn’t actually aware of. Was that for World Baseball Classic preparation?
KJ: I can’t remember, I think it was a World Cup or something that only minor league players could play in. We played in Italy; I think we started in the Netherlands and then played in Italy. It was a great thing.
NB: The 2009 Baseball World Cup was the first to be hosting by multiple countries as Europe played host as a continent. It ran from September 9-27, with the United States winning its second in-a-row, the only two major tournament championships it won using professional players until the 2017 World Baseball Classic. Jansen played for the Netherlands rather than the Netherlands Antilles’ team, his first as a pitcher after appearing as a catcher in the 2009 World Baseball Classic (which saw him memorably throw out two runners from his knees). He earned a save against Venezuela in his pitching debut on September 17, and pitched against Cuba three days later. Interestingly, his brother Ardley Jansen was an outfielder for the Antilles’ side, which also had Johnny Gregorius, brother of Didi Gregorius, who was on the Dutch national team. Kenley’s memory was correct about the order and location of the Orange’s games.

GF: Can you talk about your experiences with fans and the players in Italy and any other places you remember and compare that to back home Curaçao?
KJ: Growing up as a kid in Curaçao, playing in front of your family, you don’t want to take it for granted, but you don’t know [how good] it was playing in front of your family and friends. That was a great moment growing up playing baseball, that was a time that you don’t stress. So playing in Curaçao is the best thing. Playing in the Netherlands and Italy, I don’t remember that much! It’s been a while.
GF: It has been eight years, which is hard to imagine.

GF: Can you tell me then more about baseball in Curaçao, what it was like growing up, what the actual experience is like for a player there?
KJ: Baseball is Curaçao has become bigger since Andruw Jones [had] his sensational World Series in 1996, that kind of brought baseball up in Curaçao, and baseball has been going up and up and up and now here we are, guys who used to idolise him—that shows you how much that game has been grown and will continue to grow. Kids now are going to idolise us, watching us playing, and they want to do the same thing. There’s a lot of talent down there, a lot of raw talent, it’s going to continue to grow.
GF: You were only young when Andruw Jones was making the race through the minor leagues on the way to debuting as a teenager. What have the facilities, and the possibilities, and the options changed for children in Curaçao to play baseball since then?
KJ: That’s the sad thing. It’s still hasn’t changed the facilities. You see how baseball has been growing and still—you don’t want to say something about your country, I’ll always be respectful to my country—playing in bad facilities, we still don’t have good facilities. The frustration is to see that soccer keeps growing and you see how much talent we have in baseball and what we are doing in baseball, but there is still no love for baseball [from the government], for facilities, or baseballs or bats. Someone has to figure that out, to help.

GF: So is the growth of the game really on the backs of former players and coaches and people like that, rather than around facilities and money?
KJ: The government is definitely not doing anything for baseball, that’s for sure! I don’t want to talk bad about my country, but I am being realistic about my country to see how we still have players playing in dirt [and] rocks. The ball bounces left and right and that shows you how much talent we have. It’s frustrating, as a major league player, to see that we’re not moving along well.

GF: Can you talk about playing conditions on some of the fields when you were growing up in Curaçao and what that was like?
KJ: It was the same thing. I was playing in dirt and rocks. It was tough. You don’t have grass, you don’t have turf. But now when you see how soccer is in Curaçao, every field has grass turf. You see how much more talent we have, how many more players we produce in baseball. That’s frustrating.
GF: Do you have an idea of why football is growing more than baseball is?
KJ: I have no idea! I just don’t want to get in the middle of that. What’s realistic is that we have more major leaguers than soccer players.
GF: That’s a pretty harsh fact right there.
KJ: Like I said, I’m not going to get in the middle of it, I love my country. Certain stuff is just like, “Wow!” It’s a wow feeling. 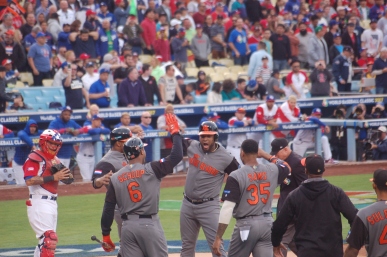 GF: There are now an increasing number of players from the Dutch Caribbean in the majors and in the minor leagues as well and I think you’re probably one of the faces of that group. What do you think your role is to improve that situation in Curaçao?
KJ: My role is [that] I’ll continue to help. I never stop helping. There’s a lot of teams down there that I’m helping with baseballs, I’m helping with bats. I’m helping with a lot of stuff. I just don’t want to get credit, because I don’t need to get credit [for] that. I want nothing for the best for another Kenley Jansen, another Wladimir Balentien, another Profar, another Sharlon Schoop, another Mariekson “Didi” Gregorius. You want to more of them continue to accomplish their goals. I try to do everything I can to help with the needs, the number one needs. The number one need is bats, and all those other [things].
GF: Do you send them to the federation down there or to people you know?
KJ: To my foundation. My foundation gives it to teams that need it.
GF: Can you tell me where we can find that online for people who may want to get involved?
KJ: I have my foundation in Curaçao, but I didn’t make it international yet, and that’s the one thing yet that I probably have to start working on and see if we can get funds from international [sources] and maybe try to help develop and grow baseball.

GF: Your manager with the Netherlands, Hensley Muelens help start the Curacao Baseball Week a few years ago. How do you think that’s changing the game down in Curaçao?
KJ: It’s a great experience, man, to see all the major leaguers come together. I wasn’t in the last three years, to see our current major leaguer players locally go in and help the kids and show them their experience and then have guys like Chris Archer go there, I think that’s a very great thing. We need more of those.

GF: What some young players that fans of the Netherlands and of Curaçao that might break on the scene as the next generation of Curaçaoan talent? Do you have in mind any players, maybe teenagers, that are coming up?
KJ: No, I don’t, but I’ve been hearing a lot from my scout on the Chirino team, that he has a lot of good players coming up, so I think there’s a lot of talent coming up.

GF: It’s been a pleasure, I really appreciate you talking about Dutch baseball and Curaçao and it was fun watching you guys in the World Baseball Classic. Good luck the rest of the season with the Dodgers and see you at the next Classic!
KJ: Thank you!

If you enjoyed this interview, you may find the following articles interesting:
MLB Legend Jim Kaat Talks New Zealand Baseball, Dutch Heritage, and WBC
“It Means a Lot”: Balentien and Profar on WBC
Jansen on Putting the Netherlands ‘On the Map’
Melancon on New Zealand and Role as MLB Ambassador

1 Response to Jansen on Baseball in Curaçao: “I Never Stop Helping”