After hosting the Europe-Africa Olympic Qualifier in September, Italy will next welcome the European Baseball Championship. The 2021 edition will be the first with 16 teams and is the first major baseball tournament scheduled for next year to be confirmed for its original date. The Baseball Euros will take place in the Piedmont region of northern Italy next September, with venues to be announced.

It is noteworth that the senior Baseball Euros will not, as of now, be postponed because of the pandemic. This year’s B-Pool and C-Pool tournaments were postponed to 2021, along with the U23 Qualifiers, U18 Championsip, and U15 Qualifiers. This means that the senior level championship will be played in the same year as the Olympics (likely around six weeks later), plus the above tournaments and, possibly, some other events previously scheduled for 2021.

Six Additional Teams to Join Europe’s Top Level
Qualification has yet to be announced, but given the uncertainty of public health issues 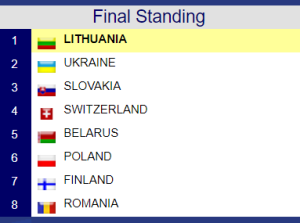 even 12 months from now and the fact that the Olympics will be played only six weeks before, it seems unlikely a separate qualification tournament would be held.

Instead, it would make sense if all 12 teams returned from the 2019 Baseball Euros (above figure). Adding Lithuania, which lost a qualifier to Israel, would make 13 teams. Given the time frame, it is likely that at least the runners-up of the B-Pools (Ukraine and Russia) would join (below left), though perhaps the three highest-rated teams in Europe might be automatically added.

Interestingly, despite the record number of teams (the Euros have included 12 teams since 1997), only one, Lithuania, would make its debut in this scenario. All but two returning teams have appeared at least six times. The exceptions are Israel, which debuted in 2019, and Austria (two appearances). For those curious, Ukraine has appeared six times, most recently in 2010, and were it to play at Europe’s top level, it would cap a remarkable rise from the C-Pool in 2018. Russia has appeared in 12 of the last 14 editions, including nine in-a-row between 1991 (months before officially becoming the Russian Federation) and 2007.

There are, however, two other solutions to qualification for the European title. Should the Confederation of European Baseball wish to retain only the 10 non-relegated 2019 teams, one of two things could happen: 1) A qualification tournament of other teams or 2) Fill the final spots based on WBSC rankings. Each has its issues.

Of the two options, the former would create a situation in which six teams would need to qualify. That would surely a necessitate an event with, at least, eight teams, if not another full set of B-Pool qualifiers with the top three sides advancing. The composition would have to include the two relegated teams (Croatia and Sweden), the losers of the qualification round (Lithuania), and some of the other 13 nations that competed in the B-Pools.

In the second scenario, which could also be used in the situation described above, which cancels relegation, WBSC rankings would determine who automatically advanced from the B-Pool. According to the latest poll (shown to the left with world rankings numbered), the six highest non-qualified teams are Russia (No. 9), Ukraine (No. 12), Lithuania (No. 13), Slovakia (No. 14), Poland (No. 15), and Greece (No. 16). This would, of course, be further bad news for relegated Croatia (No. 17) and Sweden (No. 20). It would mark the first appearance at the continent’s top level for Lithuania and Poland.

Federation sources indicate that the two paths most likely to be followed are the initial setup in which no teams are relegated and four teams added, unless competition next summer is possible, then a regular B-Pool Championship would be played in June or July.

Possible 2021 B-Pool Contestants
Assuming a best-case scenario with the pandemic no longer a threat by early next summer, we can theorise what a B-Pool tournament might look like. As stated above, somewhere between three and six teams will need to qualify.

The difference of three in those figures depend on whether Croatia, Lithuania, and Sweden are given automatic births to the A-Pool. Let us assume they will not and a minimum of six teams will earn promotion. Given that number, maintaining the two pools of six as in recent years would make sense.

That would leave us with the inclusion of 11 of 13 countries from the last B-Pool, depicted above, meaning two would not make the cut (Romania and either Bulgaria or Finland). In all likelihood, two federations will simply not enter teams because of a lack of funds or, perhaps, each pool would have seven competitors.

Additional Effects of Expansion
There will, however, be significant effects of expanding the European Championship. In recent years, there have been three tiers of baseball in Europe (which includes Israel, Turkey, and the Caucasus), with the bottom two teams from the top level trading places with the top two from the B-Pool. The top two teams from the C-Pool move up the B-Pool. There is no formal relegation from B-Pool as not all countries send teams each time their current level of qualification is contested, mainly due to extremely tight budgets. As many as five teams have been promoted from C-Pool in a single year (2018).

The B-Pool has consisted of multiple groups in different locations since 1984, with anywhere from two to five groups. Since 2013, it has held steady at two groups, usually with six teams in each group (with last year’s eight in Slovakia the exception). The C-Pool was instituted in 2014, with eight teams competing in a single location. In 2016 and 2018, the lowest tier was split into two groups of five in different locations.

In total, the most recent editions of each tier featured a total of 30 countries, including 12 in the A-Pool, eight countries that competed only in B-Pool (leaving out Israel, which moved up a tier, and five countries that also played in C-Pool), and 10 in C-Pool. With four more teams in the highest level tournament it leaves only 14 nations from the last qualification cycle below the top tier. This could result in the two qualification levels being combined into one after 2021, almost certainly at two locations.

The elimination of C-Pool is unlikely, however, for several reasons. First is a simple matter of competition. Many of the teams currently in the middle tier—Croatia, Greece, Russia, Slovakia, Sweden, and Ukraine—regularly qualify for the A-Pool. Meanwhile, a few nations have consistently finished mid-table in the B-Pool and have never been promoted or relegated (Belarus, Switzerland) or seem unlikely to be relegated (Ireland, Poland, Serbia, Slovenia). All but Belarus regularly feature at least two or three professional or university dual national players.

There is clear gap between these 12 and the remaining teams. For example, Finland has played in both qualification rounds since 1998. Their record in B-Pool during that time is 4-28 and currently feature no elite high school or university dual nationals. Removing the lower team would not only eliminate playing opportunities for these nations, most of which are small federations, but also mean a lot of blowouts in the B-Pool.

Another reason to retain C-Pool is the possibility that we may see the debut of new countries or the return of some dormant nations. Kosovo Baseball has made significant strides in the last two years and joined the WBSC in 2019. Sources indicate they may consider fielding a team at the next C-Pool. Given the outrageous logistical costs for African championships, it would be great to see Tunisia compete in the C-Level Euros, but we are unaware of any talks to include them. It is worth noting, though, that South Africa was in talks to join CEB for much of the 1960s and 70s, so there is a path for Tunisia’s inclusion.

The WBSC has been working closely with Turkey in the last 18 months, which has not competed internationally since 2006. Perhaps development efforts will encourage their return. Latvia last entered a team in 2014 and was, for a while, fairly active. A third nation that might also reenter competition is Moldova, which last competed in 2004, but has been very active in baseball5 in the past two years. Others that could theoretically return, though are highly unlikely, include Malta (2008), Portugal (2008), and San Marino (last active in 2006).

We will likely have to wait until later in the year or even early 2021 for confirmation on the structure of the 2021 European Baseball Championship and its additional teams. Scheduling of future tournaments, including the C-Pool, will likely be divulged at the same time.

We previously reported that the Baseball Euros were in consideration for expansion in February [link].