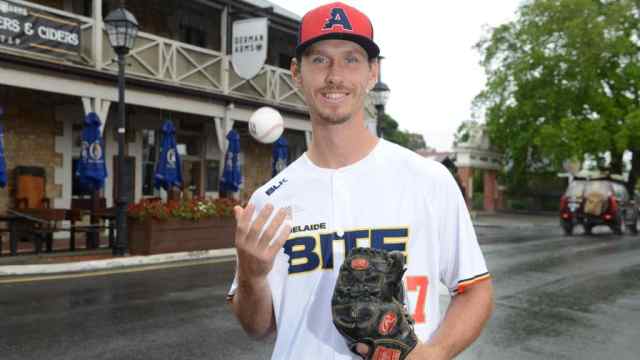 ADELAIDE, Australia — In a game featuring multiple WBC qualifying round stars, recent Dodgers signee Markus Solbach today broke the Adelaide Bite record for most strikeouts in a season. The German right-hander struck out fellow international veteran Gift Ngoepe in the second for the record-breaking K as Adelaide topped Sydney 3-0.

Solbach has had an excellent season, tossing eight quality starts from the beginning of the season. After a small hiccup last week, the Dormagen native finished on a strong note, whiffing four in 3 1/3 scoreless innings. Solbach tied Dushan Ruzic‘s 2012 club record with a strikeout of Jacob Younis in the first, while Solbach got Ngoepe swinging for his 72nd K to start the second. After a walk to former major leaguer Jason Rogers, the Bite starter added to his club record with another strike three to Jack Murphy.

The new record will stand at 74 after Murphy was called out on strikes in the fourth, Solbach’s last batter of the season. Despite the 27-year old’s efforts, his Adelaide squad were the only non-expansion team not to make the playoffs, though it has won almost 20 percent more games this year.

Solbach finished with an eye-popping 1.10 ERA, 0.83 WHIP, and .178 batting average against in 10 starts over 65 1/3 frames. His strikeout mark is second in the ABL behind yet another national team veteran, Italy’s Alex Maestri, who finished with 77 in 58 1/3 innings. Team Australia’s Steven Kent has 72 in the exact number of frames as Maestri, but with one start remaining after his was rained out today. It is currently No. 10 on the all-time best season marks.

On Jan. 3, it was reported he had inked a minor league deal with the Dodgers, returning to affiliated ball for the first time since 2016. Solbach had a pair of excellent seasons for the Rockland Boulders of the Can-Am League, recording a 2.99 ERA and 1.15 WHIP in 259 innings combined.

This year, he returned to Germany to play for the Bonn Capitals, winning North Division Best Pitcher after recording a 0.38 ERA in the regular season and a 2.76 ERA in the playoffs. Solbach has a 3.34 ERA in 1056 2/3 career innings from his first season at age 16, with a superb 3.51 minor league mark across six campaigns.