SAN DIEGO, Calif. – Could Puerto Rico be the team to beat in Pool F of the World Baseball Classic? Like the Dominican Republic in 2013, Puerto Rico entered the 2017 Classic on the shortlist of the best teams in the world thanks to a mixture of experience and enthusiasm. As with its island neighbour then, Puerto Rico’s roster is not perfect, but it is loaded with top tier talent that surprised some with a perfect run through a brutal Pool D.

In each of Puerto Rico’s four games, it has won with a mixture of exceptionally athletic defence, superb pitching, and timely hitting, while playing with a panache and passion that has drawn deserved attention. Only the Dominican Republic has stood a real chance, and Puerto Rico has spent a total of one and one-half innings trailing its opponents, all of which came in the opening frames against Italy.

Its veterans have delivered in key situations, from Yadier Molina’s exceptional showing behind the plate as he handles a mostly unfamiliar pitching staff to Carlos Beltrán’s steadying presence en route to a .462 average and 1.101 OPS. Molina has drilled two important home runs late in games, sealing victories against Venezuela and the D.R., while Beltrán was 3-for-4 with a walk in a game that Mࢹéxico kept close until late.

“As Yadier Molina goes, the team goes,” explained Puerto Rico manager Edwin Rodríguez. “He brings so much not only defensively, but he also brings offensively. The way he handles the pitching, well, we saw tonight [against the Dominicans]. We’ve been watching that for years in the big leagues and with Team Puerto Rico. But definitely, he’s the heart of the team.”

The talk of Pool D in Jalisco, though, were the trio of young shortstops in Carlos Correa, Francisco Lindor, and Javy Báez. Not only has each of them demonstrated impressive approaches at the plate, but they have made highlight reel plays while communicating well considering none play on the same MLB team.

Lindor drilled two home runs against México on the way to Pool D MVP honours, hitting .429 and tying for the team lead in runs (4) and hits (5). He has yet to strike out in the Classic. Perhaps more of note is the sheer joy evident in his leaps, hip bumps, and hustle or the flair with which Lindor and Correa whip the ball back-and-forth going around the horn. 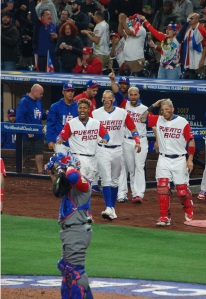 Lindor, if possible, has actually amped up the energy in the second round and I pointed this out to him while asking if the Classic was exactly what he had dreamed of growing up.

“Why not celebrate? I’m going to celebrate,” added Puerto Rico’s shortstop. “I’m not disrespecting the game. I’m not trying to disrespect anybody. I’m just going to be myself and I’m going to share my teammates and our success.”

Correa has a 1.289 OPS, ripping dingers against Italy and Venezuela, while adapting rapidly to playing third base. In fact, the Astros’ star has looked more than comfortable at the hot corner, hustling in and to his left to make a running play in one game and gunning another runner out from the line. 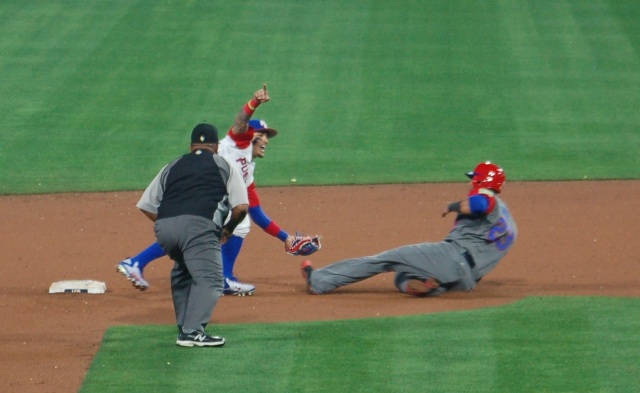 Báez has had his moments, too, clubbing a three-run homer in the ninth against México that completely took the wind out of its sails. His most talked about play came against the Dominican Republic, though, as he caught a laser of a throw from Molina and swiped a no-look tag on Nelson Cruz while wagging his finger in celebration.

“Chemistry for us is beautiful here. Everybody is getting along,” noted Lindor. We are happy, and we’re here to learn – we learn from each other, we feed off each other, from Beltrán and from Yadier, which they are more experienced and have been in this experience more, and Pagan and the coaches, they have been here many more times than we have.”

Lost amidst the young infielders has been the stellar play of rightfielder Eddie Rosario, who is leading the team in hitting at .545 and OPS at 1.492. He is second in the WBC in hitting. Rosario threw out the D.R.’s Jean Segura in the opening inning of round two and then drove in what would be the game-winning run on a ground rule double.

“In 2013, learned so much [during the WBC],” remarked Rosario. “I was a young guy. I had had never played in the major leagues, but I lost four games versus the Dominicans. I came back here to play against the Dominicans; it’s everything for Puerto Rico.”

The bench has come through as well, from Mike Avilés single and a triple against Italy to Kiké Hernández 3-for-5 total. The backups have hit a combined .375 while giving Yadier Molina and other important rest.

Meanwhile, the pitching staff has been superb, from Seth Lugo’s 3 2/3 perfect innings to start a 5 1/3 scoreless run versus Venezuela or José Berrios’ stunning adjustments against Italy after getting hit hard in the first two frames. Berrios retired the final 10 batters to face him, striking out half of them, including two looking. Fellow Top-100 prospect Jorge López also impressed in Pool D.

The bullpen has been even better, allowing only one run in 22 1/3 innings (0.40 ERA) with 21 strikeouts. Héctor Santiago has given Puerto Rico much needed innings as a long reliever, while Edwin Díaz continued his 2016 breakout form as he flashes 99-mph heat in the closing role.

Before Puerto Rico’s game with Team USA, Rodríguez discussed his pitching, observing that “We’re hoping to get five innings, maybe six from Seth Lugo tonight. Maybe seven! Then the bullpen will take care of it.” For the skipper, that was all that needed to be said.

After a complete effort against the Dominican Republic, Puerto Rico finally avenged in 2013 WBC title game heartbreaker, and it did so with even more energy and passion than in Guadalajara. It was clear that, though they played well in the first round, they turned it up with the loss to the D.R. on the team’s mind.

I pointed this out to Rodríguez, who responded, “Well, you described that perfectly. We’ve been playing well, very well. The pitching was there in Mexico even when the ball was carrying out. Then, facing a team like the Dominican, I think you got it right. I mean, the motivation was there. We were waiting for this for four years, and they were at their best.”

The next big test will come against the United States at 7 p.m. PDT tonight (3 a.m. GMT). In games featuring professional players, Puerto Rico is only 4-7 versus Team USA, but has won the last two in important spots. In 2015, Puerto Rico secured a 10-9 victory in extra innings in the Pan-American Games, while in the last WBC, the U.S. territory triumphed over the national team, 4-3. (“That was a good game!” piped up Rodríguez.)

The U.S. arguably has a deeper lineup and bullpen, but it’s hard to argue with Puerto Rico’s chemistry and sheer exuberance. If Puerto Rico wins tonight, it will advance to the semi-finals, joining Japan and the Netherlands, but along the way, they will no doubt entertain.

“So this is what it’s all about,” commented Rodríguez about his team’s excitement. “There’s a lot of emotion here, and you just let them play. I mean, we let the other team celebrate they way they want to celebrate because this is what it’s all about. They’re playing for their country. You’ve got the change to do this every four years. They’re not trying to embarrass anybody, they’re just having fun.”