FARNHAM PARK, Bucks. – A late rally by Durham University fell short against the Southampton Mustangs, and the upstart DU side had to settle for a place in the non-medalists’ bracket after an 11-7 loss. Fielding miscues and walks were Durham’s undoing in its second game at the Spring National University Baseball Championships.

Durham starting pitcher T.J. Garske got off to a good start, getting a strikeout looking to start the game. The right-hander lost the number two hitter, Pau, on a full count, and was victimised a batter later with a fly to right that dropped for a triple over the head of Durham’s rightfielder. After another base on balls, a force-out plated Southampton’s second run. Garske would work out of a bases-loaded jam after a heady play by the catcher Amané Sobue, who dove fully outstretched to catch a foul fly.

The men in black-and-purple would get to work in the bottom of the frame after a Sobue single, taking second after the fielder held the ball. A gutsy bunt hit by captain Will Zucker would put runners on the corners with no outs before Durham’s leadoff hitter scored on a wild pitch. The skipper then took third on stolen base and scored on a fielding error by the Mustangs’ shortstop after a walk to tie the game at two.

With runners on first and second and none out, Durham appeared to be threatening, but a screamer off the bat of Marcus Helland was caught on the shoelaces by Southampton’s second baseman, who flipped to the shortstop to catch the lead runner before nabbing a third out at first for a rare triple play.

After discussion on the field, the play stood, and Durham took the field in a 2-2 ballgame. Southampton quickly broke the draw, as the team’s leadoff hitter worked a five-pitch walk with one out and swiped second and third. A dropped throw at first led to a run, before Garske got the final two outs.

Durham failed to score in the second, and the Mustangs, wearing maroon and gold, knocked the Palatinate’s starter from the contest. Garske gave up a leadoff walk before getting his third K, this one looking, but a RBI-single after a stolen base played one, and a final base on balls marked the end of the game for the hard-working hurler. 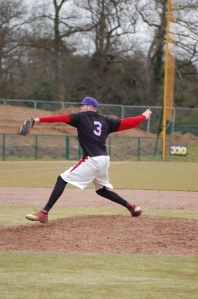 Helland took the mound in relief, and had the ignominy of a balk called by the umpire for a fake to third then first. The towering righty settled down for a one-pitch bouncer to first, but Pau spelled trouble again, taking a walk and nabbing second. He would score on a fielding error by the shortstop and moved to third on a two-run double to right-centre by the cleanup hitter. A second two-bagger played two before Durham finally got out of the nightmare inning having allowed six runs.

Down 9-2, Durham got to work, as Sobue worked a walk and moved to second a wild pitch, going to third on a safety by Zucker. A wild pitch got the Palatinates their third run, but despite a one-out walk to put runners on the corners, Southampton’s starter Meuth got out of the jam.

The Mustangs scored two more in the fourth on a hit and two walks, with the runs scoring on a passed ball and a wild pitch, as the exceptional Sobue was tested frequently by Durham’s wild hurlers. Down 11-3 and with the time limit approaching, Durham was told the fourth would be the final inning.

Not to be deterred, defensive replacement Laurence Hodgkins looked at four balls and advanced to third on back-to-back errant pitches before Andrew Poole joined him with a walk and stolen second. Back-to-back RBI singles by Robin Wallich and the tireless Sobue worked the margin to 11-5. Sobue pilfered second in front of a Zucker walk, and a double steal moved them over. Brad Jones joined him with a free pass, and Durham had the bases loaded with no outs.

Garske played a run with drive to centre that was caught for a sacrifice fly, but with the score at 11-7, Southampton’s pitcher dug in and got the next two batters out to preserve the victory.

This year’s Spring Championships were set up in three pools of three teams, with the winners of each moving to a championship pool. The loss dropped Durham to 1-1, moving them into the bracket of second place teams battling for fourth place. Earlier losses (19-0 and 18-3) by Durham’s second team placed them in the lowest pool.

Sobue improved his average on the young season to .600 with a 2-for-2, three run day, reaching base all three times and driving in one. Zucker joined him with a two-hit day for the Durham team, who worked six walks and collected six hits. The black-and-purple did not strike out, but committed four big errors to Southampton’s two.

Extra Innings UK covers baseball around the world, focussing on the sport at the national team level, with features on prominent players, scouting reports, and occasional breaking news. We are fully credentialled by MLB and have covered the World Baseball Classic, continental championships, and the U.S. minor leagues.
View all posts by Gabriel Fidler →
This entry was posted in British University Baseball and tagged DU Baseball, NUBC, NUBC16. Bookmark the permalink.