The Cubs’ Matteo Bocchi, the Blue Jays’ Marc Civit, and the Reds’ Hendrik Clementina have been given permission to sign with UnipolSai Bologna for the 2020 season. They mark the first known signings of MiLB players with another league during the pandemic. We looked at minor league contracts and spoke to multiple European federations, which allows us to confirm that these signings are highly exceptional.

Fortitudo Bologna announced on Saturday that Civit (pictured above) would suit up for the Italian club in 2020, though no details on his contract were mentioned in the article [link]. This morning, July 9, the club put out a press release to state that Clementina would be added for IBL play [link]. No release was forthcoming for Bocchi, but the right-hander pitched yesterday on Opening Day.

Bocchi chose a more unusual route to the minors, transferring from Odessa College after two years and turning in two excellent years at the University of Texas. The soon-to-be 24-year old then signed with Chicago as an undrafted free agent and turned in a 2.97 ERA with 35 strikeouts in 30.1 innings across three minor league levels.

Civit signed with Toronto in 2018, two weeks after his 16th birthday, and had a stellar debut in 2019. Despite starting the Dominican Summer League season at age 17, the Spanish southpaw had a 3.13 ERA and .250 batting average against in 31.2 innings. Civit averaged more than two innings per appearance.

Meanwhile, Clementina had a second-straight solid season in the mid-minors. After a .268/.327/.497 line in Single-A in 2018, the backstop was promoted to the Florida State League, a notoriously difficult league in which to hit. Clementina responded with a .249/.296/.411 mark in his age-22 season.

Although it is relatively common to loan players to the Mexican League, given it falls broadly under the Minor League structure, other international loans are extremely rare. These signings, however, do not mark the first time a player has been loaned to a European team. The Red Sox’ Marco Cardoso has yet to play in the minors in July 2017, but has continued to suit up in Germany. Cardoso, however, has yet to see MiLB game time, whereas Civit and Clementina are both active players.

The standard “Minor League Uniform Player Contract” has a section on loaning contracts, including “transferring to a Minor League Club which is not a member of a National Association League” (though it is unclear to what this refers). The contract also states: “If Player agrees, this Minor League Uniform Player Contract may be assigned, loaned, leased or otherwise transferred to (or Player directed to perform for) a Minor League Club or other professional baseball club participating in winter league play.” Neither of these clauses, however, seem to indicate the possibility of leagues other than winter ball and the Mexican League. [Click images to read at full size.]

Given that the above is the sum total of information in the player contract about playing in other leagues, we contacted European federations to find out whether the contracts for European players routinely include a special proviso for playing in domestic leagues or whether this year marks a special exception.

A spokesperson for the Royal Dutch Baseball and Softball Federation (KNBSB) told us that “players are allowed to play in other leagues due to the cancellation of the MiLB season. They do, however, need approval from their professional organization.”

This suggests that players are able to ask their organisations for temporary exemptions, though whether there are geographic restrictions (e.g. Latin American leagues, the CPBL, etc.) is unclear.

A spokesperson for Spain’s Real Federación Española de Béisbol y Sófbol spoke with Xavier Civit, father of Marc and himself a former minor leaguer. The discussion was conclusive [staff translation from Spanish]:

“Marc has the Blue Jays’ permission to play in Europe, but there is no special clause in Marc’s contract. He informs them of any movement he makes and they give him the OK or not to play.

“This year is special because MiLB will not be played and they have given him the OK to play as he can. Surely under normal circumstances there would be more restrictions.”

European Players and the 2020 Season 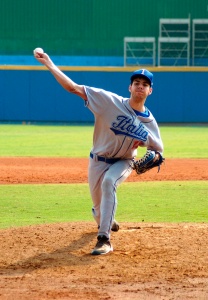 With the exception of France, European leagues are beginning play, with multiple nations beginning play the weekend of June 12-14. Currently, 14 national leagues have started their seasons, with the Netherlands likely to join the list soon and Germany already playing practice games. The only significant league not to announce plans is Spain.

European leagues in recent years have also become a more popular destination for foreign players and the pandemic appears to have enhanced the appeal. Bologna has a fourth recent minor leaguer on its roster in Aruban Ray-Patrick Didder, who was only released on May 28. Alberto Mineo, the long-time starting catcher for Italy, was let go a day later and has since signed with Nettuno.

Players from other European countries are in a similar position as well, as only the Netherlands and Italy have players in the high minors. There is the potential for European players at the calibre of Leonardo Seminati (Short-Season Single-A), Anton Kuznetsov (Short-Season Single-A), Niklas Rimmel (Rookie), Tom de Blok (Single-A), and Ernesto Martinez (Rookie) to see time in Serie A1, the Hoofdklasse, and elsewhere. Several dozen other players played in summer rookie ball last year or have signed since, creating an even larger pool of potential players. We will have more as the situation develops.

Many thanks to KNBSB and RFEBS for promptly responding to requests. Hat tip to Iker Bilbao (@IBilbao2B) on the Bocchi signing. Photo of Marc Civit from WBSC’s Under-18 World Cup page. Photo of Clementina from redsminorleagues.com.