The number of Europeans playing baseball at American universities and high schools reached what is likely an all-time high in 2019. In 2018, a total of 77 Europeans and those eligible for the continent’s national teams suited up for American institutions, including 41 developed in Europe. This spring, that number climbed to 86, not including four that took the year off. Of those, 41 grew up in a European country, with Czech Republic (7), the Netherlands (7), and France (6) producing the most homegrown ballplayers.

Of the larger total, there are a whopping 29 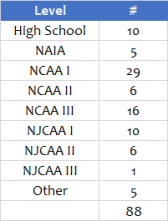 players at NCAA Division-I universities as part of 54 at four-year institutions. Junior colleges (19) and high schools (11) make up the rest. Many will be continuing: only 17 graduated with a bachelor’s or master’s degree this spring, though another seven were junior college (‘JuCo’) second-year players (‘sophomores’).

Greece (13), Ireland (10), and Serbia (6) have particularly large numbers of naturalised citizens at the university age. Every one of Ireland’s players under the age of 23 spent his developing years in the U.S., while Greece’s list includes three developed in Canada and the remaining in the U.S. It would appear that European nations are doing a better job of recruiting U.S.-developed players for their national teams. On the other hand, every one of the players from the Czech Republic or the Netherlands was developed domestically, while France and Great Britain (5) also produced a high number.

Returning as the most unexpected nation with someone on the list is Denmark, while Slovenia dropped off the list after one year. Italy has only two on the list after 10 in 2018, but is projected to increase to six in 2020. Including coaches, 21 countries supplied players, though only 15 developed those athletes (with six putting only a single player on the list).

Excluding pitchers, catcher is the most well-represented position, with a total of 13 backstops on the list of 86. A significant number of that total (12) regularly play more than one position. A shocking two played regularly in the middle infield, though there were 10 at the hot corner. There are 31 players that are primarily pitchers, though by including two-way players, 30 throw from the right side and 11 are southpaws. 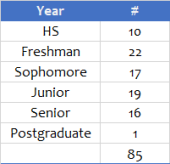 d 2022 are also known, with projections for the 2020 season at around 90 total players, including 53 developed in Europe. It is likely that the former number will grow by a few players as nations recruit for various competitions, though we do not expect the number of those based in Europe to change by more than a few.

Regarding the discussion of athletes this year, we will focus more on those developed in Europe. Only those who made one of our All-Star teams in 2019 will be eligible for awards again as we focus on players developed outside the U.S.  We will break the list down into smaller pieces every day.