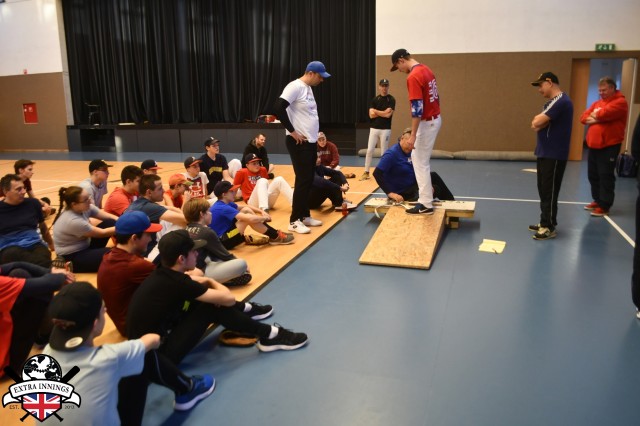 Last month, MLB Europe’s Bill Holmberg and Zach Graefser graced a small suburb of Budapest for the MLB Europe Baseball Coaches’ Clinic (Baseballedző Képzés). An evening of seminars led to two days of practical instruction to coaches from all over Hungary, Serbia, and Croatia, including national team coaches. The clinic was organised by Terry Lingenhoel, founder of the sizeable Érd Baseball Club and hosted by the International Christian School Budapest in Diósd.

Holmberg and Graefser brought impressive credentials to the clinic. Holmberg served as Pitching Coach for the Italian national team between 2007-2018, including a World Cup and three World Baseball Classics.

The venerable Holmberg ran the FIBS Academy in Tirrenia until it moved to Rome last year, producing Alberto Mineo, Marten Gasparini, Alex Liddi, and others. Holmberg also scouted for the Cubs before transitioning into a full-time development role with MLB in Europe and has been honoured by the EBCA with a Lifetime Achievement Award. 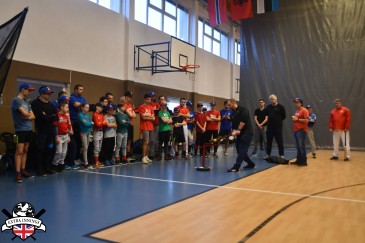 Meanwhile, Graefser was hired as Pitching Coordinator for Great Britain Baseball in 2015, working across all levels of the programme and travelling with the team to European Championships and the 2016 World Baseball Classic Qualifier in Brooklyn. Graefser is also Head Coach of the MLB World Select Team, which features players from non-traditional baseball countries, including players from Europe, China, and Oceania.

The first day, February 8, involved presentations from both coaches, with Holmberg speaking on “Throwing Injuries and How to Prevent Them” and “The Basics of Throwing”, while Graefser spoke on “The Basics of Hitting”.

Holmberg drew from his vast experience in club and national team coaching in Italy and Germany to encourage the roughly 30 coaches in attendance. “I have done the same thing that you guys are doing right now. European baseball is not the same as in baseball in the US, or Cuba, the DR, or Japan; European baseball is different. It can be hard for Japanese or American coaches to relate to European baseball. We have different problems.”

“We had 22 players sign professional contracts and 18 players that threw over 90 [at the FIBS Academy],” continued Holmberg. “Not all of those 18 were excellent athletes, but a lot of hard work, sweat, and patience allows us to develop players.”

Holmberg then offered examples of different types of arm injuries, including UCL, gleno-humeral ligaments, rotator cuff, growth plates, bone chips, and elbow extension and flexion issues. The veteran coach then broke down into detail the various parts of a pitcher’s motion, emphasising the differences between style and fundamentals.

“I would love to see a Hungarian pitcher sign a professional contract and go to the United States. There is no reason you guys cannot develop a pitcher that can throw 92-93 MPH,” concluded Holmberg. “We don’t have to have the best athletes, we don’t have to make the excuse of not having super athletes. The more time you devote to throwing mechanics, the more chances you have to make a successful pitcher. Hitting you may not be able to perfect in practice, because it’s sometimes a natural thing, but pitching you can.”

“The sequence for pitchers is not the same for hitters. No swing is ever the same. Our goal is to get the bat to the baseball. There are sequences to the swing, but how they get to the swing I don’t care,” began Graefser. “Hitting is about trying to get the bat to move as fast as possible. It’s not about strength, it’s about speed.”

Graefser spoke about the three concepts of hitting—vision, balance, and timing—before breaking down the stance into stages. He explained the importance of each, breaking separation (load), bat lag, and extension down into smaller pieces. Graefser concluded with suggestions for several drills, remarking to the appreciate crowd, “We don’t need fancy tools and toys.”

The subsequent two days were spent on drills, with Saturday focussed on pitching and Sunday on swinging the bat. More than three dozen players from Érd Baseball Club, Budapest Reds, Debrecen Tigers, Szentendre Sleepwalkers, and MAFC Rangers were willing participants in stretching and a wide variety of pitching drills, with each pitcher recorded on HD Camera and a radar gun. Coaches from the above clubs, plus the Sisak Storks and Serbian Federation, worked with the players.

Holmberg told those gathered, “Our objective is to get a player in the big leagues or into a college in the US. There is nothing written anywhere that you players cannot become very, very good players.” 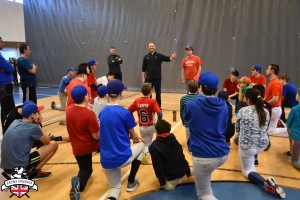 A day later, most of the players returned and were joined even more players from Érd. After explaining the drills to coaches, Graefser broke the players into six groups and had them rotate between various stations, some to correct bad habits and others to teach new skills. Afterward, Graefser concluded, “You all are going to be as good as you want to be. But you cannot just do the drills once. Do something every day, even for 10 or 20 minutes. If we practice every day, the results will take care of themselves.”

Each day included a traditional Hungarian meal in the school’s canteen, including roast chicken and nokedli, a Hungarian noodle similar to spätzle or gnocchi, and palacsinta—similar to a crépe—and filled with a savoury or sweet middle, in this case, minced pork. An evening meal in a charming restaurant in Buda, replete with homemade palinka, made for a great time of discussion for the coaches and MLB representatives.

“The MLB coaches clinic was a great investment into the coaches of Hungary. The future development of our sport depends on quality coaches,” concluded Lingenhoel. “This training was very practical and many coaches appreciated that. Having the opportunity to try out there instruction with youth pitchers on Saturday and young hitters on Sunday really reinforced what they learned from the MLB instructors.”