When we last spoke with Bahamian Todd Isaacs, the first Don’t Blink Home Run Derby in Paradise had just concluded in sensational fashion, with Blue Jays’ top prospect Bo Bichette winning the home run crown before a large and enthusiastic crowd. In January, the next generation of Bahamian talent had yet to arrive, with many still amateurs, and the country absent from Pan-American tournaments in recent years. The event will return on Jan. 5, 2019 from Montagu Beach, with even more fanfare than its first edition.

In the 11 months since our last report, those of you who follow us on Twitter will have noticed the ascendancy of Bahamian baseball, from breakout seasons by young prospects Jazz Chisholm and Lucius Fox, plus impressive debuts from D’Shawn Knowles and Kristian Robinson. Meanwhile, Isaacs spent the year with Single-A Lake County and again teamed with country-mate and best friend Lucius Fox to recruit minor leaguers to attend.

Isaacs told us after the event last year that he had put the event together in only three months with help from his father and Fox, an incredible accomplishment given it was the first baseball event in the Bahamas featuring professional players in history. A number of highly-rated prospects participated and attended, including Nick Gordon, a derby finalist, and pitchers Triston McKenzie and Juan Hillman. Charles Johnson and Dante Bichette, Sr. were in attendance as well.

This year, Isaacs and Fox have expanded what was already an excellent event by pitting themselves as captains of Team Isaacs and Team Fox.

“With more Bahamians signed since our first Home Run Derby, Lucius and I put a twist on to the format,” Isaacs told us. “This year we will select teams from the pool of players. Each team will represent a respective charity where a 60-40 donation will be made to the winning and losing team’s charity.”

The two sides will draft a team of 14 total players from a mixture of Bahamian minor leaguers and top prospects, including defending champion Bichette, who last year took tosses from his dad. Stay tuned for the pre-recorded draft will be televised on all @DontBlink242 social media platforms this weekend.

“The Don’t Blink Home Run Derby powered by Aliv Draft was hosted at Atlantis. The draft 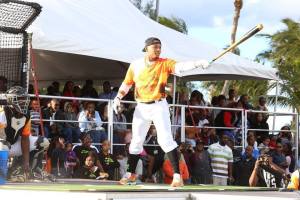 was very exciting for us because we got to be GMs for a day.”

In addition to the returns of Bo Bichette and Gordon, two young studs that saw major league time this year will be in attendance. The first is Lewis Brinson, the headliner in the Christian Yelich trade, who spent most of the year with Miami. The other big leaguer is the Atlanta Braves’ Touki Toussaint, a Top 60 MLB end-of-season prospect. Toussaint, a rifle-armed hurler, is of Haitian and Kenyan descent and grew up in Florida, but is becoming an important figure as Caribbean baseball gains rapid momentum. 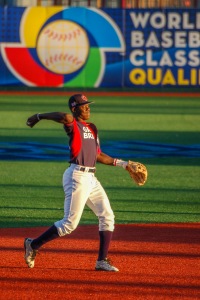 Jazz Chisholm is now the biggest name among Bahamians after an All-Star season in Single-A that culminated in an even more impressive performance to High-A. Overall, Chisholm hit .287 with 28 dingers and 24 swipes for the three teams as the Arizona Diamondback’s Minor League Player of the Year.

Chisholm will be joined by four of his Great Britain teammates, including Chavez Young, Champ Stuart, Reshard Munroe, and Isaacs. These four formed an electric outfield in the 2017 World Baseball Classic Brooklyn Qualifier for a young team that upset Brazil and lost two heart-breakers to Israel, which advanced to the second round. Munroe had a strong season in rookie league and should be a dark horse along with Robinson and Knowles, while Young had a mammoth season to break into the Blue Jays’ top prospects ranks.

On Friday, Jan. 4, the teams will host a kids’ camp at the Atlantic Resort, with five former players aiding the impressive roster of participants in teaching young Bahamians about the game. As Isaacs and I discussed in February [link], the Bahamas lacks top-level coaching and international standard facilities, adding extra importance to the clinic and derby for both instruction and awareness.

“Baseball here in the Bahamas is continuing to show steady, promising progress with an additional three players, with Orveo Saint, Chavez Fernander, and Warren Saunders being added into the professional system this calendar year.

“We are still without proper training facilities nor a conventional baseball field, so our resilience continues show. Inspiring the youth baseball players here in the Bahamas is something that we all find pivotal into the continued growth here in the country so being able to host this Home Run Derby every year is something we are proud of because we know the lasting impact it holds amongst our future baseball superstars.”

The derby begins on Saturday at noon. There will be a team winner and the top four hitters

from each side will go head-to-head for the individual winner. As in the 2018 edition, players will aim for targets set in the water off Montagu Beach, with kayakers retrieving the balls for use in youth leagues around the island.

“We chose to represent both Cancer societies because Cancer is one of the top causes of death throughout the Bahamas. Many of the guys that are participating in the event have lost their mothers, grandmothers and aunts to cancer. I myself have lost both grandmothers and grandfather to cancer. We want families to know that they are not fighting alone and we are proud to help.”

Those wishing to attend the event will want to stay tuned to our Twitter @ExtraInningsUK and follow @DontBlink242 for updates. The Atlantis Resort will be offering discounted rates for the entire week of the derby, with more information here [link].