Posted on November 9, 2018 by Gabriel Fidler

CAPE TOWN, South Africa – South Africa continued its excellent approach early in the game, jumping out to an early lead, and Robert Lewis-Walker tossed his second gem of the series as the host nation cruised to a 7-1 victory over France. The result gives South Africa a 3-2 lead in the seven-game series, with two more games at the Durbanville Ballpark.

As it has done in all but one game this series, South Africa scored in the game’s opening frame. Jonathan Phillips doubled with two down and Rowan Ebersohn bounced a ball up-the-middle to score a single run against France’s Owan Ozanich.

After a nifty double play in the top half, Kyron Bibis gave South Africa a big boost in the bottom of second. The slender leadoff hitter ripped a two-run bomb to score Dayle Feldtman and boost his team’s advantage to 3-0.

Meanwhile, Lewis-Walker appeared very comfortable throughout his appearance. In the third, Bastien Dagneau ripped a long double to start the frame, moving to third on a bloop hit to right by José Paula. Lewis-Walker kept his easy pace, however, and pumped fastballs by veteran Felix Brown before sending him down swinging.

In the third, Keegan Swanepoel laced a two-bagger to right with one down. Feldtman then sent his own safety to right and the home side took a four-run lead.

Both pitchers then settled into a groove. Lewis-Walker gave up another long hit to Ariel Soriano, 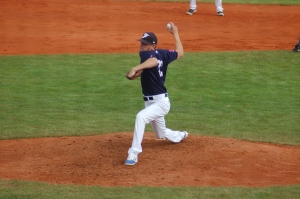 but sent down a pair of batters on strikes in the top half of the fourth. It was nothing doing against Ozanich in the bottom of the frame before Lewis-Walker returned for a scoreless fifth, striking out his seventh batter.

The game’s defensive highlight came in the latter half of the frame, as Charl Cordier lined a ball into shallow left field, but Maxime Lefevre raced from the regular shortstop position to make a leaping catch at full extension [video].

South Africa finally broke through again in the seventh after Benjamin Smith led off with a one-base hit to centre. Brandon Bouillon immediately took advantage, lacing a two-bagger to left centre for the 5-0 lead. A walk to Feldtman would follow, but reliever Meylian Marin would get out of the inning without further damage.

In the bottom of the eighth, Jonathan Phillips crushed a ball over the wall in dead centre, but after sprinting out of the box, crumpled to the ground after rounding first. The South African captain grabbed his right thigh as he fell to the ground, eventually limping around the bases. His status remains uncertain, but as the tournament’s leading hitter and veteran anchor on the left side of the infield, South Africa will have a hard time replacing him.

Frédéric Hanvi would get France on the board in the top of the ninth, ripping a two-out solo shot to right centre, but Damon King would finish the game with a called strike three.

Phillips joined Feldtman with a brace of hits, with each drawing a free pass as well. Only Soriano had more than one hit for France, which was held to six base knocks and four base on balls.

Lewis-Walker (2-0) was exceptional for the second time in the series, with his eight strikeouts a series-high for another pitcher. The righty tossed six shutout, scattering four safeties and a walk, throwing 94 pitches. Cameron Fortuin added a pair of scoreless innings himself, striking out two and walking a pair, while King pitched a single frame.

Ozanich was saddled with his second loss of the series. The veteran looked somewhat improved upon his dreadful first start, but gave up four runs on seven hits and four free passes in six innings, whiffing only two. Marin and Esteban Prioul eached tossed an inning of relief.

It was a pyrrhic victory for South Africa, which will likely lose the services of the series’ leading hitter for the final two contests. Phillips is hitting .478 with two doubles, a triple, and pair of home runs in 23 at bats, walking four times. Brandon Bouillon (.308 in 13 at bats) will likely see more playing time at the hot corner in his absence.

The series remains in Durbanville, Cape Town on Saturday, due to start at 2:00 p.m. local time. The game will be available to watch via live stream [link], with a coaching clinic beforehand.

A big ‘thank you’ to South Africa’s scorekeeper, Augusta ‘Gussie’ Phillips, for the box scores and statistics. All action shots copyright Extra Innings, all others Catherine Buckley.

Extra Innings UK covers baseball around the world, focussing on the sport at the national team level, with features on prominent players, scouting reports, and occasional breaking news. We are fully credentialled by MLB and have covered the World Baseball Classic, continental championships, and the U.S. minor leagues.
View all posts by Gabriel Fidler →
This entry was posted in Africa, Europe, France, South Africa. Bookmark the permalink.