Posted on November 6, 2018 by Gabriel Fidler 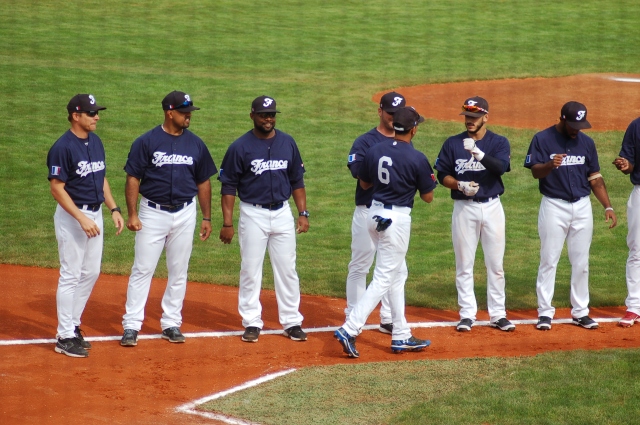 DURBAN, South Africa – South Africa continued its onslaught on the French pitching staff, but France piled it on in the middle innings and defeated South Africa 11-9. After 12 home runs left the park in Boksburg over the weekend, the two sides combined for another three, with Rowan Ebersohn homering for the third straight day.

Once more, the host nine started hot, knocking recent Phillies’ signee Yoan Antonac out of the game after only six batters. The tall right-hander struggled badly with his control, striking out the second batters he faced, but walking four and surrendering a hit to captain Jonathan Phillips. Benjamin Bodet shut down any further threat in relief, but South Africa scored four in the game’s opening frame.

France answered in the third after José Paula led off with a single through the left side, advancing to second on a wild pitch. A walk set up a sacrifice bunt, but South Africa mishandled it and a run scored. After a walk, Ariel Soriano lifted a fly ball to centre to score one and, with two down, the hosts had a chance to escape. Leonel Céspedes ensured the rally would pay off, however, ripping a double to centre to score two. The fifth run of the frame came on a Frédéric Hanvi one-base hit.

South Africa immediately answered, however, with a one-out double by Kyle Botha setting up former Twins’ prospect Ebersohn. Ebersohn blasted a two-run dinger to right to get within two. It was the third straight day that Ebersohn had sent a ball out of the yard. Dating back to the Under-23 World Cup, he has four round-trippers in his last eight games.

Free passes continued to be trouble for South Africa in the fifth. Céspedes drew a base on balls to start the frame and Bastien Dagneau launched a ball over the wall in centre for a 10-6 lead.

The hosts answered for a single run in the bottom of the frame, with a walk to Dayle Feldtman and a sacrifice bunt all that Kyron Bibis needed to score on a one-base hit. It was Feldtman again in the sixth as the backstop drilled a two-run double to score Phillips and Benjamin Smith, who had both drawn free passes. The Feldtman knock brought the South Africans within one, but that was as close as they would get.

Franklín de la Rosa and Céspedes would slam the door in the final three innings, however. Although de la Rosa struggled with his control, he did not give up a run in the seventh or eighth. An RBI-single by Soriano scored Paz in the eighth for an insurance run and France’s closer came on. Céspedes coaxed a line-out for one down and then struck out No. 3 and 4 in South Africa’s lineup for the save.

Dean Jacobs (0-1) took the loss, with errors contributing four unearned runs among the eight he allowed. Jacobs gave up four hits in 3 2/3, but walked five. He got three punchouts. Brad Erasmus saw action for the second time in the series, dishing out three free passes and two runs on one hit. He whiffed two in 2 1/3 innings. Kieran Cree then offered a solid 2 2/3 (two hits, one run, two walks, three Ks) before Timothy Lee got the final out. 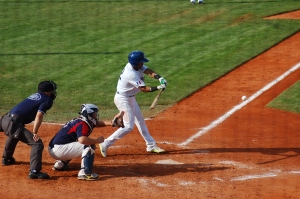 Paz, France’s most experienced player, continued to swing a hot bat with a 2-for-3 performance, though he was the only player with multiple hits. France’s eight hits and 11 walks were mixed evenly up-and-down the lineup.

Botha was the only South African with a multi-hit game, going 3-for-6 with two doubles. Phillips had a hit and two walks, while Feldtman drew three base on balls to go with his two-baggers.

The series remains in Hoy Park for the fourth contest on Wednesday, due to start at 1:30 p.m. local time.

A big ‘thank you’ to South Africa’s scorekeeper, Augusta ‘Gussie’ Phillips, for the box scores and statistics. All pictures copyright Extra Innings.