Posted on November 3, 2018 by Gabriel Fidler 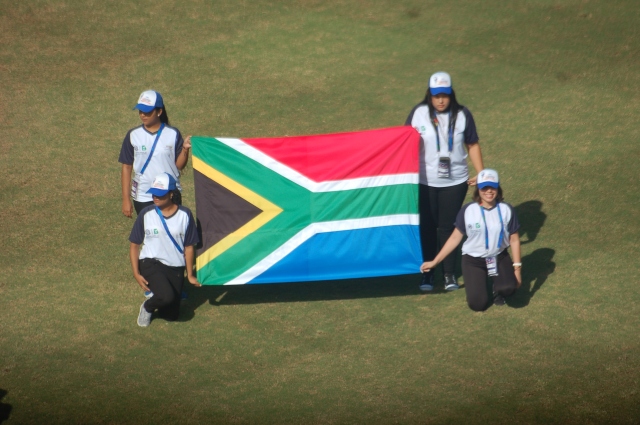 BOKSBURG, South Africa – In a back-and-forth game to which the final score did not do justice, South Africa exploded for 14 runs in the bottom of the sixth inning and walked off with a 24-13 victory in the first game of its friendly series with France. In the high altitude of the Gauteng region, seven balls left the yard, including two by the hosts’ Benjamin Smith.

The two sides mirrored each other in the early innings, with both sides plating three in the first, adding to the score in the second, and going scoreless in the third. It was the visitors that struck first after Felix Brown singled up-the-middle, starting a sequence that included a hit batter, an error, a wild pitch, and a groundball. Leonel Céspedes then ripped a run-scoring double to give France the 3-0 lead.

South Africa, on the other hand, scored its runs cleanly, starting with a leadoff safety by Victor Ngoepe. After a Kyle Botha one-base hit, Jonathan Phillips tripled to score both and came around on a Hein Robb single. South Africa had the chance to break things wide open as Smith laced a one-base hit, but Rowan Ebersohn, who had walked earlier in the frame, was thrown out at home. 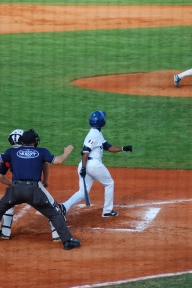 The visitors struck back in the second as Felix Brown, the French leadoff hitter, took a Jared Elario pitch deep to dead centre for a solo shot. South Africa would get the run back and then some as Phillips crushed a three-run roundtripper to left field to make it 6-4 through two.

Elario and Owen Ozanich both finally put up zeroes in the third, with South Africa’s hurler added another goose egg in the fourth. With two outs in the bottom of that frame, however, the home side built a rally that was capped with a three-run bomb by Smith to centre that spelled the end of Ozanich’s day.

Down 9-4 in the fifth, France got back into the game on back-to-back one-out doubles by Frédéric Hanvi and Bastien Dagneau. Dagneau raced to third on a throwing error on the relay and then scored on another miscue a batter later.

Botha would recoup one of the runs with a dinger in the bottom of the fifth frame, sending another big fly over the centre field fence.

Facing a 10-6 deficit, France got to work in the sixth. Maxime Lefevre walked to start things off, scoring on a double by Andy Paz, fresh off his first season in independent ball after seven years in the minors. Ariel Soriano singled him home before Hanvi ripped a double to make it 10-8. An intentional walk to Dagneau loaded the bases and David Gauthier lifted a fly to right field to score a run. Reliever Brad Erasmus then got a big groundball to preserve the one-run lead.

Esteban Prioul came in to pitch for the French side and the dam suddenly burst. Ebersohn greeted the reliever with another moonshot to centre. Veteran Keegan Swanepoel then drew a walk and move up a base on a one-base hit by Robb. Three straight free passes, including one by new reliever Jonathan Mottay, plated two runs and left the bases loaded for Ngoepe.

The younger of two baseball-playing brothers and Bristol Pirates’ farmhand laced a double to wall in centre, clearing the bases and, suddenly, South Africa found itself up 16-9. The hosts did not stop there, however, reloading the bases on a single to Phillips and a base on balls to Botha. One run came home on an Ebersohn sac fly before Swanepoel and Robb stroked RBI-singles.

The big blow came once more from Smith, though, as South Africa’s centerfielder blasted a three-run homer to centre once more to increase the lead to 22-9. Kyron Bibis then lifted his own big fly to the same spot and the 14-run inning was complete.

After being on the receiving end of one of its worst drubbings in recent memory, France

could have gone quickly in the seventh. Instead, it loaded the bases on a Lefevre single and two walks, with Soriano dropping a two-run single over the infield to score two. Another walk jammed the sacks, with a runner crossing home on a groundball to the left side, with a throwing error plating a fourth run in the frame.

Erasmus induced a double play to prevent a further rally and the 37-run game came to a close on the mercy rule. The hosts out-hit France 19-12 and drew 10 walks while surrendering six, though they committed five errors to the visitors’ three.

Botha, Robb, and Smith all had three hits, with the latter driving in six and walking twice. Five other players collected a hitting brace, including Bibis, who drew two free passes as well.

Meanwhile, Hanvi led France with three safeties and Brown, Soriano, and Céspedes each had two. The bottom third of the French order sabotaged the rest of the lineup’s effort with a 1-for-11, five strikeout day.

The series remains in Boksburg for another day, with the two teams tangling at 1 p.m. local time.

A big ‘thank you’ to South Africa’s scorekeeper, Augusta ‘Gussie’ Phillips, for the box scores and statistics. All pictures copyright Extra Innings.