Yesterday, we released the first half of our list of Europeans playing baseball while studying in America [link]. The article includes a lengthy introduction about all the athletes and provides context that we will not repeat here. Today is the release of the second half of the group, which features players at two-year universities and in high school.

There are a total of 15 players at two-year universities in the US, plus three more that are in high school. Two-year institutions are usually called community colleges (CC) or junior colleges (JC), both of which may be abbreviated JuCo. There are three levels of JuCo ball in America, governed by the National Junior College Athletic Association, or NJCAA. There are seven Europeans in Division I, six in Division II, and three in D-III.

Of the three players in high school, only two are actually playing in the States. One of them, Joseph Kalafut, along with Italian Giulio Monello, have already shared their commitment to universities in 2019. Kalafut will be attending Edgewood College, while Monello will play at Odessa Junior College, which has featured quite a few Europeans in the last few years.

Two-Year University Player of the Week: 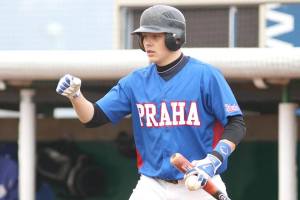 Mužík, who was an NJCAA Division II Second Team All-American, has started every game and is mashing at a .455 clip. He has five extra-base hits, including three home runs, both ranking among national leaders. He has scored nine runs and drive in another nine.

Two-Year Pitcher of the Week:
Maurizio Andretta was electric in his first start of the year for Clarendon CC, sending down eight on strikes in four innings to earn the win. He allowed only two baserunners, both on singles.

Two-Year Rookie of the Week:
Sammy Häckl slashed .316/.480/.526 in seven games to open the year and hit the first home run ever by an Austrian in the US to help Arizona Western CC to an eight-game winning streak.

Two-Year Universities and High Schools
Maurizio Andretta, LHP (FR, Clarendon Community College [6-1], Tx.) [Bio]
Andretta was a signing from the International Stars’ College Showcase in October of 2017. Another Italian, Stefano Berini, suited up for the Bulldogs in the past. Andretta was electric in his season debut on Feb. 10, striking out eight in four innings to earn the win. He allowed only two baserunners, both on singles. The southpaw did not pitch this week.

Marius Balandis, RHP (FR, Iowa Western Community College, Ia.) [Bio]
The Reivers’season does not start until next weekend as they travel to Crowder College (Mo.) for a pair of doubleheaders. Balandis was a revelation at the Under-23 European Championship, where we named him one of our Top Prospects (No. 4, had they been ranked). Drawing the start for Lithuania against bronze medallist Belgium, Balandis struck out six in seven frames, surrendering a mere three hits and one earned run, though he did walk five. Last spring, the right-hander was 4-0 with a 0.72 ERA in his first four starts for a high school ranked No. 27 in the U.S. Balandis struck out 34 and allowing only six hits in 19 1/3, though he has walked 18.

Martin Červinka, IF (FR, Wake Technical Community College [5-2], N.C.) [Bio]
Červinka has started his first campaign in the U.S. on the right foot, going 5-for-15 with three walks to help propel the Eagles to a winning record. He has scored seven runs and stolen two bases as well. Červinka has played third base in all five of his starts.

Josef Cihlář, RHP (FR, Odessa Junior College [2-7], Tx.) [Bio]
On a team with 21 Texans, Cihlář is one of four international students along with three Australians for a Wranglers squad ranked No. 4 among Texas State Junior Colleges. Unfortunately, Cihlář has contributed to the team’s rough start by allowing five runs in three appearances spanning three innings. The righty has given up four hits and four walks, striking out three. The Czech native signed via International Stars’ October College Showcase.

Mikołaj Dąbrowski, RHP-IF (JR, Carnegie Schools-Riverside [0-0], Calif.) [Bio]
Dąbrowski, who thrilled in the Euros and was named one of our Top 20 Prospects, is the only high schooler on this list and, incredibly, is only a junior. The Wolverines do not begin their schedule until next weekend, when they take on Citrus Hill HS (Calif.) in a doubleheader. Dąbrowski struck out seven in 6 1/3, allowing two runs on eight hits and two walks. This year, the righthander struck out 27 of the 43 batters he faced for Carnegie Schools-Riverside, who were 20-3-1 in the tough Southern California baseball scene. Dąbrowski was 2-0 with a 1.91 ERA, allowing only 10 singles in 11 innings, without a single walk. 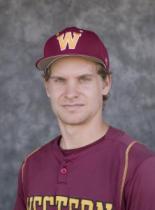 The only Austrian playing either university or professional baseball in the United States, Häckl is off to a strong start in Arizona. The first-year catcher is slashing .316/.480/.526 in seven games and has hit a home run for a Matadors’ side that is on an eight-game winning streak. Häckl is another International Stars’ College Showcase sign. In the U23s, the young backstop was 3-for-3 against Georgia, lacking only a four-bagger for the cycle. Häckl drove in four, scored three, walked, and swiped a bag in a 17-1 Austrian win.

The only Danish-trained baseball player in the U.S., Holmelund plays for a Catamount club that also features Belgian Joakim Svedheim. Holmelund grew up playing softball, in which Denmark rates quite highly. Last year, he redshirted at Missouri Valley College (which was swept by Tim Schaareman’s Pirates this weekend), before transferring to Potomac. He did not appear in this weekend’s opening series.

This season, Mužík has started every game and is destroying the opposition to the tune of a .455 average and five extra-base hits, including three home runs. He has scored nine runs and drive in another nine. Mužík has caught four games and appeared twice at first base. His three roundtrippers are tied for fifth in NJCAA Division II, despite him having fewer at bats than all but four players in the Top 17. Of players to appear in more than three games, Mužík’s 1.000 slugging percentage is sixth in the U.S. He is tied with teammate Kevin Catrine for 26th in D-II for extra-base hits, though their five games played is the among the fewest in the Top 50. For those who doubt the power, check out this video from his Instagram [link].

“I do believe Martin will play at the next level. Martin has an advanced approach at the plate. He can make adjustments at bat to at bat and pitch to pitch,” Wake Tech Head Coach Eric Sibrizzi told me last year. “I think he definitely can stick behind the plate, but I think he would be a great pick up for anyone due to his versatility. His teammates love him and they know he is the hardest working guy in the program. I have enjoyed watching him grow and get better since he has been here and as a coach, he gets you even more excited to come to the ballpark.”

Nebenfuhr, a Czech Republic native,  joins Austria’s Häckl and France’s Villard as the Europe contingent of an internationally well-represented Matadors’ club. The Matadors have eight players from outside the U.S., including athletes from Canada, Curaçao, the Dominican Republic, South Korea, and Venezuela. Nebenfuhr has had mixed results in his three relief appearances spanning 8 1/3 frames. In his first appearance, he was drubbed for six runs, five earned on five hits and two walks, striking out two. The next time out, however, the righty has had a two-inning scoreless effort with one hit and a whiff. Meanwhile, on the Feb. 10, Nebenfuhr earned the save with three shutout innings, scattering three hits and K-ing one.

Julian Rip, OF (SO, Hutchinson Community College [4-3], Kan.) [Bio]
Rip had a standout first season for the Blue Dragons, slashing .308/.436/.449 and stealing 10-of-11 bases attempted in 34 games. Rip’s slow start to the 2018 season mirrors HCC’s, as he has struck out six times in 11 plate appearances, going only 2-for-10. One of his hits, however, was a three-run homer in the season opener. Rip is joined at Hutchinson by fellow Netherlands native, Timo van Lingen.

Soliveres has had a solid start to the 2018 season, hitting .294/.368/.353, starting six of the Hawks’ 15 games. He has been, by far, Hillsborough’s best catcher, tossing out 2-of-5 runners attempting to steal and playing flawless defence behind the plate.

Soliveres split time between catcher and left field during the U23 Euros, earning a spot on our Top Prospects billing. Soliveres is a graduate of MLB European Elite Camp and was an MLB European All-Star and was solid at the U23s, slashing .250/.423/.450 with three stolen bases and four walks in six games. He also threw out both runners that attempted to steal against him. The 5-10, 175 Toulouse native hit .192/.241/.274 for HCC in 2017, but threw out 27 percent of runners with strong marks for fielding (.984, only two passed balls and three errors).

Bor Starc, OF (FR, Clarendon Community College [6-1], Tx.) [Bio]
Starc is a unique player at any level in the States, as he is the only Slovenian, having trained in Italy at the Tirrenia Baseball Academy (hat tip to Kevin Senatore @ksderwei97). Starc appeared in the first game of the spring season, going 1-for-4 against Western Texas, striking out once and scoring a run.

Joakim Svedheim, RHP (SO, Potomac State College [1-2], W.V.) [Bio]
Svedheim is one of three Belgians in American university ball and attended St John’s International School in Belgium growing up. Last year, the righty appeared in a single game, throwing a scoreless frame, allowing a hit and hitting a batter, striking out one. Svedheim has yet to appear in a game in 2018.

Timo van Lingen, RHP (RS SO, Hutchinson Community College [4-3], Kan.) [Bio]
Van Lingen is in his second year at Hutchinson after red-shirting last season following his transfer from Ohlone College (Calif.). Van Lingen has pinch ran twice this season but has yet to take the hill. In 2016 as a first-year at Ohlone, the righty appeared in nine games, striking out seven in 6 2/3, though he gave up eight earned runs on 12 hits and seven walks.

Like Nebenfuhr, Villard got off to a rough start, taking the loss in a relief appearance against the College of Southern Nevada, the university that produced Bryce Harper and Phil Bickford, among others. CSN scored three earned runs on two hits in Villard’s 1 2/3, though he did strike out two and was the victim of poor pitching by subsequent relievers.

Since then, Villard has been electric, striking out one in a scoreless inning (allowing one safety) on Feb. 9, and a day later, striking out three of the four batters he faced. All told, his ERA is 6.75, but the righty’s WHIP is 0.75 and he has six Ks in four frames. The Matadors have a pair of doubleheaders on the docket this week, so it is likely their three Europeans will see plenty of action.

Frédéric Walter, 3B (FR, Seminole State College [4-2], Okla.) [Bio]
Walter is one of only two players from outside the U.S. (joined by a Quebeçois) at the Oklahoma two-year university. Walter has played third base in half of the Trojans’ games, going 1-9, scoring two runs, and striking out once. The native of Montigny, France has been flawless at the hot corner, fielding one putout and six assists without an error.

All photos are courtesy of players’ respective universities.