The Confederation of European Baseball announced the schedule for its Under-23 Championship Qualifier in August. Last year, 16 teams competed for the title of champion, but the top six remaining in the A-Pool, while the rest were relegated to the B-Pool. Great Britain and Croatia just missed the cut and lead the two respective groups.

Britain will play Serbia, Poland, Slovakia, and then Russia over five days before a two-day playoff. Great Britain finished seventh out of 16 in the U23 Euros last year, forcing relegation to the B-Pool. Serbia did not compete, Poland was 10th, Slovakia was 12th, and Russia 11th.

The other bracket features Croatia (No. 8 in 2017), Ukraine (No. 9), Austria, Belarus (No. 13), and Switzerland (No. 14). Lithuania and Georgia, the last two teams, are disappointingly not fielding teams in the U23 qualifying round. The winner of each pool will qualify for the European Championship in 2019. 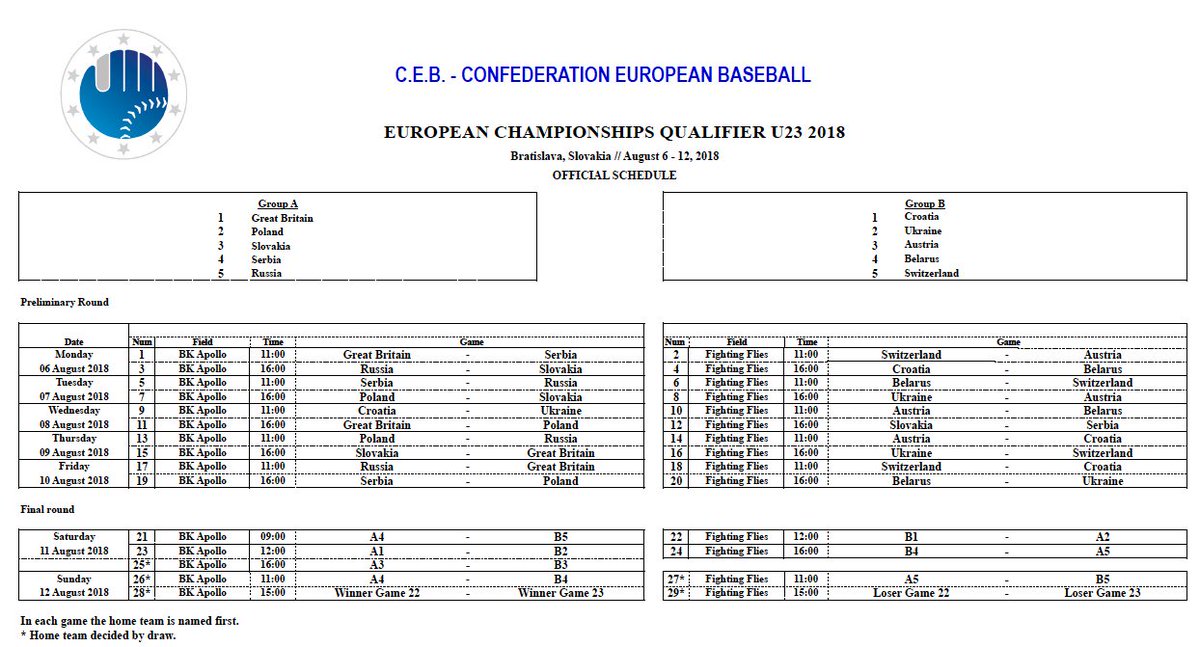 Extra Innings UK covers baseball around the world, focussing on the sport at the national team level, with features on prominent players, scouting reports, and occasional breaking news. We are fully credentialled by MLB and have covered the World Baseball Classic, continental championships, and the U.S. minor leagues.
View all posts by Gabriel Fidler →
This entry was posted in Austria, Belarus, Croatia, Europe, Georgia, Lithuania, Poland, Russia, Serbia, Slovakia, Switzerland, Tournaments, U23 European Championship, Ukraine. Bookmark the permalink.