The Asian Baseball Championship starts today in Taiwan between Japan, Korea, Taiwan, Pakistan, Philippines, Sri Lanka, & Hong Kong. Held every two-to-three years, the tournament was at its peak in the 90s and 00s when it served as the Olympic and World Cup qualifying tournament, but in recent years, Japan and Korea have sent squads lacking any star power. Despite this approach, the two continue to be the class of the event, with Taiwan in a distant third. The gulf after this triptet, however, has narrowed as Pakistan, Sri Lanka, and Hong Kong have started to pour more resources into baseball. Meanwhile, China and the Philippines have stagnated, with the latter struggling badly with funding and organisation.

The tournament is being played as the qualifier for the Under-23 World Cup for the first time. China was originally meant to participate, but pulled out of the tournament only two days before it was due to start over “travel issues”, meaning it will not be at the U23 Cup. The reality is more complicated, however. Taiwan, or ‘Chinese Taipei’, as it known officially to placate China, has long been considered an enclave of China by the mainland government and exists in political purgatory as an only partially recognised state. A new premier (prime minister) was elected on Sep. 4, and according to the Taiwanese media, new premier William Lai’s comments have been seen as especially forthright support for Taiwan. China, it would appear, waited until the last moment to pull out and thus, will not have the chance to qualify for the U23 Cup. 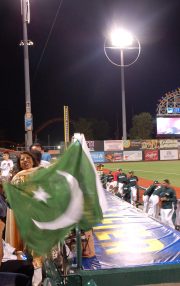 Sri Lanka was the surprise winner over Pakistan in the West Asia Cup, guaranteeing them a spot in the Championship. Fellow minnows Hong Kong also appear for the first time in the main draw, though they participated in a 2007 qualifier. Meanwhile, it is the fourth consecutive appearance for Pakistan, who also featured in 2017 World Baseball Classic qualification. For more on Pakistan, we wrote a feature on the nation’s ascendancy from Brooklyn (link). Finally, after funding issues in 2015, the Philippines are back. After the three giants, the Pinoys have made the most appearances and have three medals in 24 tournaments, but have made three WBC qualifications.

The only squads likely to challenge for the crown and claim

Asia’s three guaranteed spots in the U23 World Cup are regulars at Japan, [South] Korea, and Taiwan, all with 27 appearances. Japan has claimed a medal in each (17 gold, 8 silver), the best rate among any team. Taiwan has 11 silvers and Korea has 10. Had China competed, the eight teams would have been the most ever, but its late exit prevented possible competitors Indonesia, Thailand, or Nepal from joining.

Thanks to Rob Liu at http://www.cpblstats.com for his assistance in research for this article.