The Month in International Baseball (September) 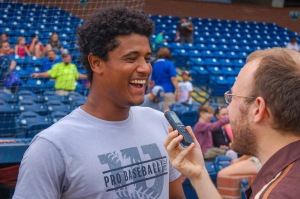 It has been a busy month for us, as we completed our tour of ballparks in the southeast of the United States, wrapping up interviewing with rising European stars Marten Gasparini and P.J. Conlon, the latter of whom is likely quite soon to be the first Belfast native in the major leagues since 1909. In our interviews with Italy’s Gasparini (link), Northern Ireland’s Conlon (link), and Colombia’s Erick Julio (link), we talked about the differences in baseball around the world and how baseball and identity intersect, with the players also reflecting on their growth over the season.

Continuing along scouting lines, our report on the Top 20 Prospects at the 2017 European Under-23 Championship was our most-viewed article ever (link).

We broke the news in English that Dylan Unsworth will be the first South African to appear in the Venezuelan Winter League (tweet).

2018 competitions were announced by the Confederation of European Baseball, with tournaments to include the Under-12, U15 qualifiers, U18, U23 qualifiers, and Senior Team C-Pool (tweet). A playoff between Lithuania and Austria will determine an automatic bid to the 2019 Euros, while the loser will return to the B-Pool with another qualifying chance. Notable hosts include first-timers Ireland, while Hungary will welcome the U12, Croatia the U15, Italy the U18, and Sweden the U23.

The WBSC updated its rankings, with Japan clinging to the lead over the United States despite the former’s dominant 2017. We explained what happened (link).

October will offer a glance into university baseball in Britain, coverage of the Asian Baseball Championship, and more interviews with international prospects from around the world.