GB’s Davison on His “Phenomenal” Day in Hyde Park

HYDE PARK, London – Gary Davison has represented Great Britain on a number of different stages, but none have ever been as notable as the one he climbed on July 4, as the Senior National Team member donned a ‘Red Sox’ jersey on British Summer Time’s Great Oak Stage. A star with the Southampton Mustangs, Davison was a last-minute addition to the Home Run Derby roster, but justified the selection, finishing third on his team in home runs.

MLB Battlegrounds was the first official Major League Baseball event in the UK and an important launching point for more organised games, as we explained in a piece for Baseball America (link), making Davison’s appearance as GB representative all the more noteworthy. The event featured an East Coast vs. West Coast vibe, with teams, deejays, and interactive events representing Boston and Los Angeles.

Since then, MLB has committed to hosting games in Britain in June 2019 and 2020, a major coup for BaseballSoftballUK and the GB national squad, and we broke down the league’s Collective Bargaining Agreement to find out what was is to be expected in two years’ time (link).

Davison first suited up for Great Britain in 2004, playing for the Junior National Team for three years, moving to the Seniors in 2012. The Mustangs’ star had a career day during his only appearance for the Navy-and-Red in the 2015 Alpine Cup. Starting as the designated hitter, Davison ripped a grand slam among six RBI in an 8-6 victory of Planet Baseball. The slugger has only seen action in five games in European competition, going hitless in four at bats in both the 2012 and 2016 European Championships.

Davison is also a two-way star for the Mustangs, whom he joined in 2011. The right-handed hitter was, perhaps, originally better known for his exploits on the mound, earning the 2012 club Cy Young Award, as well as its MVP. Davison is 22-9 in 38 games, compiling a 4.07 ERA, but of late, has seen more time as a first baseman. He has a career .394 average, slugging 19 home runs in 315 at bats en route to a .692 slugging percentage.

Southampton competes in the National Baseball League in Britain and won its first-ever NBL title in 2016 after losing in the championship series in 2013 and 2015. Davison was a big reason for the Mustangs’ success, as he set career highs in virtually every category, including average (.458), home runs (8), total bases (68), and RBI (29). His roundtripper and total base tallies led the NBL.

Davison started off the 2017 campaign in a 2-for-19 slump, but went 7-for-8 with two home runs and a double the last weekend in June, excellent preparation for Battlegrounds. In fact, any notion of the ‘Curse of the Home Run Derby’ so often mentioned after MLB’s All-Star break, could hardly be less applicable to Davison, who is 12-for-23 with five extra base hits since Battlegrounds. 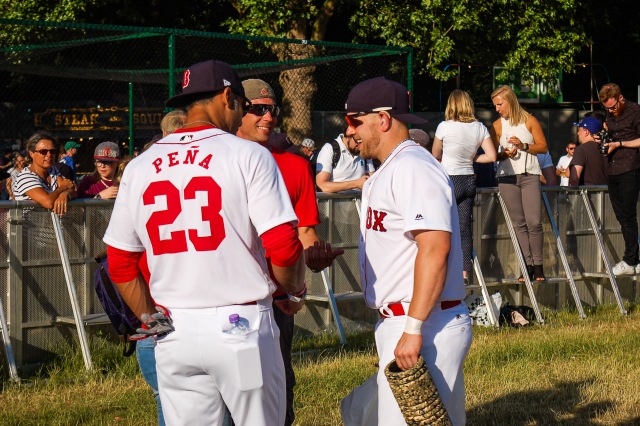 The muscular Davison, listed at 5-11, 243, looked to be enjoying himself immensely as he swapped jokes with Cliff Floyd and Carlos Peña early in the day at Battlegrounds. Despite being tabbed for that evening’s home run derby lineup with Peña, Davison joined Great Britain’s U15 and U18 teams for a clinic with Peña and Floyd early in the morning, and was still excited about the experience later that day.

After speaking with fans (including his mother) and Boston teammates, the affable star took time to discuss MLB Battlegrounds with us before hitting the batting cages. Moments later, Davison was first up for the Boston side and availed GB Baseball well, accumulating 10 points from home runs and distance strikes, hitting another two to the warning track. Text from our conversation is below, with audio available here. 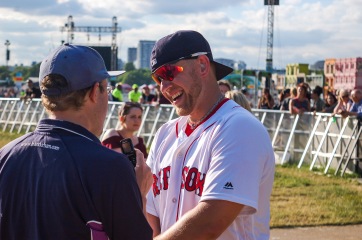 Gabriel Fidler: We’re here with Gary Davison at MLB Battlegrounds. He’ll be taking part in the Home Run Derby later tonight, he last saw action in the Euros last autumn, but this is Hyde Park, centre stage, following in the act of Justin Bieber. This is probably the biggest stage you’ve ever been on!
Gary Davison: It’s the biggest thing I’ve ever done in my entire life, by far! [grins widely as he surveys the stage] I’ve been to tournaments in America, I’ve won tournaments, I’ve been the winning pitcher, but being in the middle of Hyde Park is phenomenal! It’s amazing!
GF: It’s literally the biggest stage you’ve ever been on!
GD: Yeah, it is literally, 15 feet up in the air, a home run [display] that rotates; it couldn’t get better than this!

GF: How have you prepared yourself coming into an event like this?
GD: I’ve been talking to the pros a lot, picking their brains about how they relax in front of a big crowd. The biggest crowd I’ve performed in front of is probably three or four hundred people, and here there’s at least a couple thousand. They’ve told me to just relax and have fun, hit the ball a long way—I did it earlier in practice—so I’ve talked to them a lot.

GF: That echoes a lot what we heard this morning in GB Baseball’s clinic with Carlos Peña and Cliff Floyd. They were saying much the same: stay balanced, stay focussed, think about each pitch and be ready for each pitch and think, “I want this pitch to come to me and I’m ready for it” and then take a breath after it. That’s actually not bad advice for you, who has played in some international events, and it’s not your first game.
GD: I’ve been playing for 20 years now, and if they had told me that 10-15 years I think I would be a better player than I am now. That clinic was phenomenal, so if they don’t even get half of the advice they were given, it will enable anyone to become a better player. I’m definitely going to be using it today and for the rest of my life and I will become a much better player than I am.

GF: It was great advice, but it was incredible just to have this access to Carlos Peña and to Cliff Floyd, each of whom hit more than 200 home runs in the big leagues. They were just out there hang out, talking…
GD: That’s right, it’s not just the advice, it’s the people giving it. We’re not just talking about people who have kind of made it, these guys have made it, they’ve hit a load of home runs and for the advice they give us, we respect it more.

GF: How did you actually get the call, as it were, to ‘The Show’ today?
GD: What happened was that I was doing a lot of practice testing out all of the equipment at Farnham Park with [GB Head Coach] Liam [Carroll] and [GB teammate] Callum [Vinall], and they were wanting a couple of reserves for the day in case anyone got hurt, so Liam said, “Are you free” and I said, “Yeah, I’m down, if I’ve got any chance of getting in!” [laughs as he plays it cool] And then he messaged me last week and said, “Someone’s dropped out, you’re in.” It was just pure luck, happening to be in the right place at the right time and, for me, it paid off. I’m happy with it!
NB: Farnham Park is Great Britain’s national baseball and softball facility in Greater London, with international and club events held there, along with the National University Baseball and Softball Championships.

GF: And what a beautiful day for it. It truly is British Summer Time today; finally, summer is here!
GD: Summer is here, baseball in the middle of Hyde Park, with two thousand people and I assume hundreds of them are baseball fans, and people that I know, so there will be loads of catching up with them when the whole thing is done, but the atmosphere here is going to be buzzing!
NB: Official attendance was over 20,000, and Davison was correct in his assumption of more than 2,000 congregating around the Great Oak Stage. 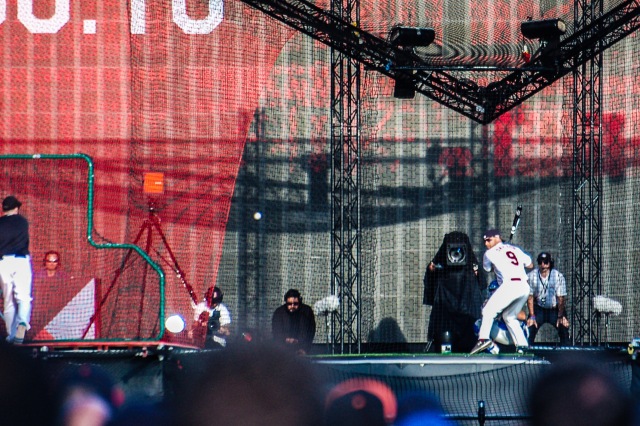 GF: Either way, go out there and have some fun, take loads of selfies on that big stage, and live it up, that’s what it’s all about!
GD: Perfect, thanks very much.
GF: All of GB Baseball is rooting for you and we can’t wait to see it. Good luck!
GD: Thanks, bye!