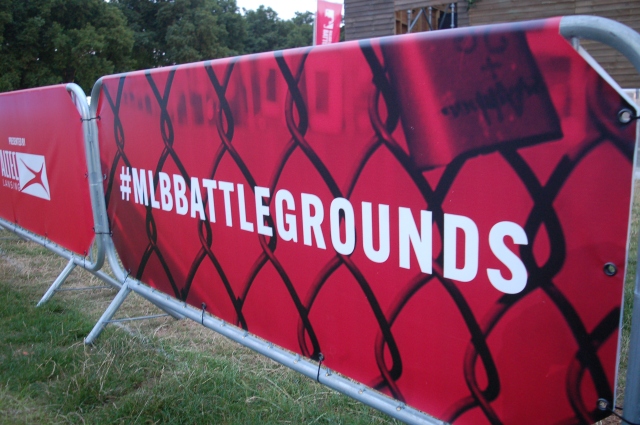 HYDE PARK, London – Will Lintern is one of British Baseball’s true success stories, learning baseball as a child in the southeast, playing for Great Britain Baseball, and coaching for various national squads. On July 4, he added another line to his C.V.: batting practice pitcher at MLB’s Battlegrounds. Tasked with throwing down the middle to a selection of former major league sluggers and various other batters, Lintern appeared on British Summer Time’s Great Oak Stage as Home Run Derby hurler.

Lintern had quite the globe-trotting childhood, living in South Africa, California’s Bay Area, and Kent as a boy, and fell in love with the Athletics’ Bash Brothers during his time in the Oakland area. He earned his playing stripes as a catcher for Tonbridge and trained with GB’s Junior National Team before attending California’s Menlo College to play baseball.

Lintern earned caps for Britain’s senior team in 2009 and 2010, but has spent most of his adult life coaching Britain’s Cadets (Under-15, or U15) and Juniors (U18), the latter of whom he currently leads as Head Coach. The Juniors finished eighth in Europe in 2016, as Lintern has kept them moving steadily upwards. Last year’s result was up two places from a year prior, while Lintern’s squad earned a place in the tournament by finishing second in a 2014 qualifier.

We broke down Battlegrounds for Baseball America (link), and Lintern was one of the key figures in the morning’s workout where Cliff Floyd and Carlos Peña spoke to an eager group of U15 and U18 squad members. Before warming up the arm in front of 20,000 spectators in Hyde Park, the affable Lintern spoke to us about the drill, the increased momentum of baseball in Britain, and the night’s festivities. For those who prefer, audio is available here. 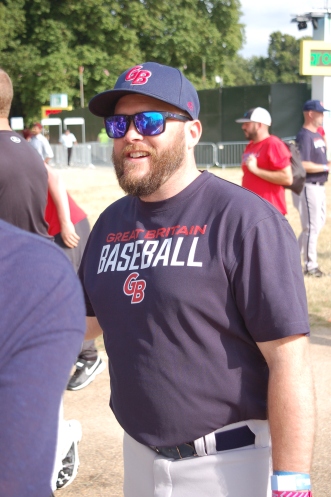 Gabriel Fidler: We’re here with Will Lintern, who’s the coach for the Great Britain U18 Team and this morning, we had the privilege of Cliff Floyd and Carlos Peña do a drill with a mixture of the U15 and U18 teams. Will, what did you think about that?
Will Lintern: First off, what a tremendous opportunity it was for our players, and also our coaches, to listen to two of the game’s greatest players. I think one of the things that we miss out in this country is the lack of [baseball] culture and how it’s embedded over here—so for every child that gets to a camp or a stadium and meet former professional players in the States, we don’t necessarily get that here. I know, when I was their age, that I hadn’t met a single professional player so, for one, that experience alone was phenomenal.

Second, it was great to hear the advice they were giving about the fundamentals of the game, the importance of playing catch, simply being ready and being focused, is almost identical, if not from the same mould as the ‘GB Way’, so reinforced not only the leadership and the vision that we have from Head Coach Liam Carroll, but also when we’re implementing those things in games or in tournaments, that the kids are getting the same information they would do if they were in the professional circuit or, even, any circuit in the States. So, it was great to see that reinforcement.

And then, third point, it’s just always great to hear information from different sources, so hopefully those kids might have taken something away, whether it was Cliff Floyd talking about his approach at the plate, or Peña’s approach in the field and how he got ready to receive the ball. If that resonated differently than it had in any of the sessions I’ve led or any of the other coaches, then that’s a win for us, and the kids are moving in the right direction. 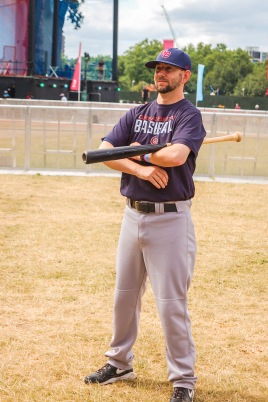 WL: Head Coach Liam Carroll was at the forefront of this event for us and, pretty much, for British baseball. He’s been a long-time advocate for British baseball and the GB Baseball programme, and the image and professionalism he showed at the World Baseball Classic was testament to that. So, when MLB thought, “We’re going to host an event here,” who better to call than Liam?

So, with Liam’s influence and his ability to not only put together a staff and recruit volunteers, he was also able to make a request and say, “Is there any way your pro guys could come work with our players?” and, thankfully, MLB is a very generous organisation that is always looking to invest into the communities, not just from a fan perspective, but player development, so we were able to take advantage of that opportunity and have that great session this morning.

GF: How much did MLB talk to Liam, in particular, about this event and the vision behind and where did GB Baseball and MLB merge with this MLB Battlegrounds?
WL: I’m not 100 percent sure, Liam is the best person to speak to, but my understanding is that as far as the vision and how the event is running, that’s mostly MLB’s baby, but GB Baseball certainly helped with the logistics and some elements of the baseball side of things.

GF: Coupled with the success of GB Baseball in September at the World Baseball Classic Qualifier, this is now really feeling like there is quite a lot of momentum when it comes to baseball and Britain—be it an official MLB event, be it actually playing baseball, [plus] we’ve got a great crowd behind us—there’s just a lot more excitement and drive behind it. How do you think an event like this contributes to that?
WL: Again, to come back to the first point I made, one of the things baseball struggles with in this country is [people don’t] realise that baseball exists outside of America. So, not only is it, one, a great fan exposure in London to be able to something which is iconic for British summer time: “I’m going to the park after work, I’m going to have a couple beers, I’m going to come to a festival-type environment.”

The BST event has been around for a number of summers and it’s very popular and quite iconic, so to make baseball fit in that type of environment is exactly the right stage for British fans to be able to say, “Ah, baseball is in existence”. And then, thankfully, because MLB partnered with BaseballSoftballUK and the respective federations, it means that if someone comes down and tries in the batting cage or catches a home run and they say, “I really enjoyed this, how do I get involved?” They can see the synergy between the organisations and connect the dots that there is baseball, not just to watch as a fan, but also to pick up a bat, or a ball and a glove, and get after it in their own community.

GF: Speaking of picking up a ball and a glove, as part of MLB Battlegrounds, there’s a Home Run Derby tonight and you are one of the select pitchers who are throwing in that. What are your thoughts about getting up on the hill again?
WL: It’s not so much a hill as a platform! It’s about 30 feet in the air, but I’m really looking forward to it. I love coaching, I love throwing batting practice, I love helping hitters get into a groove. It’s not just the big leaguers, we’ve got talent from a number of sports, if I can help them put on a good show and win the home run competition, I’ve done my job. 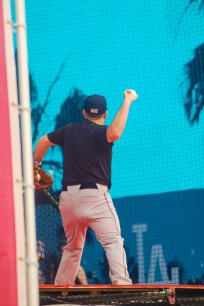 GF: How’s the arm feeling?
WL: The arm feels great! I got worn out at the European Championships last September, but it’s been a nice long winter to recover, so I’m ready to go!
GF: That’s good. Have you drawn up a really good game plan that you’re going to execute against these guys?
WL: Hip high [laughs], down the middle, and stay behind the screen!
GF: Not the typical scouting approach for a game, but it will result in some fun tonight.
WL: For the objectives of giving up a lot of home runs, it’s a good plan. If I needed to get these guys out, we would probably think of something different.

GF: Any thoughts on who might win it?
WL: Team or individual?
GF: Go for both.
WL: I really like how the Red Sox are stacked. Individual, though…[pauses], I’m going to stick with Carlos Peña.
GF: Carlos Peña—earlier in our drill, I suspect I was not the only one who thought, “Wow, this guy can hit home runs still”!
WL: Exactly. His swing is still perfect, the ball is jumping off his bat, and he’s in tremendous shape. He’s going to have a good day.
[Ed.] Peña lost in the finals despite an impressive display after an epic performance by Federico Celli.

GF: Will, I’m going to say, “Good luck”, but in this case, ‘good luck’ means surrendering loads of home runs for what should be a really fun night. Have fun out there.
WL: My pleasure, thank you very much.