LONDON – On a day in which America invaded London’s sporting scene on Independence Day, it was an Italian who stole the show. MLB hosted its first-ever Home Run Derby on British soil in an event that pitted the cities of Boston and Los Angeles against each other for an event dubbed ‘MLB Battlegrounds’. Despite competition that included long-time major league sluggers Carlos Peña, Cliff Floyd, and Shawn Green, it was 22-year old Rimini native Federico Celli who took the slugfest’s crown.

On a picture-perfect day for baseball, over 20,000 fans attended MLB Battlegrounds, part of this year’s British Summer Time Festival. The event was designed as a clash of the US’ East and West Coasts, with vendors including everything from the eponymous hot dog to Mexican cantina-style burritos, and appreciative fans had plenty of brews to select from on a warm and sunny afternoon.

Baseball fans were out in all colours, from a Johnny Damon Rays shirt and a David Ortiz jersey, with plenty of Red Sox, Yankees, Dodgers, and Blue Jays jerseys, to a variety of local English teams, from the Norwich Iceni to 2016 British University champions, Durham University.

It was Celli, though, who had the most noteworthy kit, donning his former Dodgers’ uniform as part of a team that included Floyd and Green, along with England cricketer Alex Hales and Puerto Rico Softball captain Karla Claudio. Hales and Claudio put on convincing shows, but were no match for the former major leaguers, yet it was Floyd and Celli that advanced to the second round.

Whilst battling for a team title against a Boston team in Red Sox jerseys, Celli only got hotter as the sun went down. His total bested Floyd, who had 233 major league home runs, in the semi-finals, earning him the right to face Carlos Peña for the individual and team crowns. 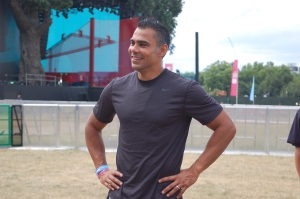 Peña was the best of a Boston team that included former German minor leaguer Julsan Kamara, who joined Celli, Floyd, and Peña in the second round. Peña had 286 home runs in a storied career, behind only Green (328) in the event. Other sluggers included Great Britain baseball’s Gary Davison, who only just missed advancing to the second round, along with England cricketer Jos Buttler and USA Softball legend Taylor Hoaglund, each of whom knocked several balls out of the park.

It was all Celli in the final, though, as he launched a barrage of home runs, adding additional points through a quirk of the event, with targets ranging from 100 feet (30.5m) to 250 feet (76m). The right-handed slugger, who played for parts of three seasons in the Dodgers’ system, collected a whopping 31 points in his three-minute title bout, far more than any other player, including Peña, securing the individual title, as well as the team championship for L.A.

The impressive displays delighted fans, many of whom had come from the far corners of the UK to represent their teams, along with a contingent of Americans and Canadians.

“We’re here to celebrate July Fourth, but in British style & this GB Baseball jersey proves it,” exulted Colin Murray to the appreciative crowd. “It’s a privilege to be out here. It’s an honour to put on a jersey,” responded Carlos Peña. “It’s important to keep this mentality, it keeps you working.”

“An event like MLB Battlegrounds is key,” GB Baseball Youth coach Will Lintern. “It’s British: ‘I’m going to go to the park, have a beer, enjoy a festival environment, but also be introduced to the sport.”

The fun started earlier in the day, Peña and Floyd were in peak form as they teamed up for a morning clinic with members of Great Britain Baseball’s U15 and U18 squads. “We want to share some experiences. We’ve been through some ups and downs, which is kind of cool. When everything is just cruising, most of the time you really don’t learn anything. It’s through the difficult times that you start trying to make adjustments and start learning” explained Floyd. “The biggest thing we want to tell you guys is you have to take the responsibility and accountability of coming out to the park and taking every opportunity to get better every time you step on the field. This is not a playground.”

“Cliff makes a great point,” chipped in Peña. “Baseball is a game of failure, which is great because life has a lot of failures. You gotta learn to deal with failure. You gotta take something positive every day. You want to focus on process, not outcome.”

Despite their turn as sages, Peña and Floyd cleared felt back at home in MLB jerseys as both observed after Round One that they intended to keep focused and were eager to get back in the cage and hit. Floyd had noted earlier that “Baseball is a team game, but you can also excel as an individual,” and both demonstrated a flair for the personal dramatic while encouraging their teams after every turn at bat.

Speaking to MLB’s Charlie Hill, head of its London office, before the derby, he explained: “How do we put together experiences of audiences who are not accustomed to the sport? I don’t know where the idea came to take over a music festival, but at some point it made sense, and here we are. It’s essentially a very public experiment.”

With astonishing crowds, towering home runs, and a family-friendly environment, it’s safe to say the experiment was a success. Hill noted that time for reflection would occur before planning the next MLB Battlegrounds, but UK-based baseball fans will certainly hope it becomes an annual affair.

For more on MLB Battlegrounds, our series of interviews starts with Carlos Peña and will also feature Cliff Floyd, Shawn Green, GB Baseball’s Will Lintern and Gary Davison, and MLB International’s Charlie Hill.