Celebrations and Mutual Respect in the World Baseball Classic 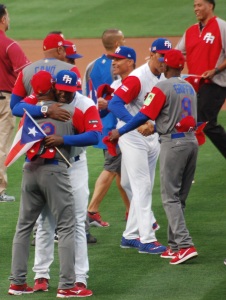 LOS ANGELES, Calif. – What has been obvious throughout the World Baseball Classic is something that is often missing from important international sporting events—respect. In a tournament with implications as big as the Olympics or the World Cup for many nations, teams have shown incredible passion, but also taken the time to applaud their competitors, and the fans have taken the same approach.

In other sports, trash talk is more common and, certainly, it does occur regularly on the diamond. In the WBC, however, players have spoken often and eloquently about how their priorities are to their country and teammates, rather than for individual glory and, as such, these athletes have commented on national pride, the importance of the fans, and their heritage rather than opining on opposing players’ beliefs or actions.

The Classic has been filled with incredible displays of power and athleticism, like Giancarlo Stanton’s moonshot of a home run last night, or Adam Jones’ leaping, over-the-wall snag of Manny Machado’s certain roundtripper. These plays have been justly celebrated by players and fans alike, but these moments, along with plays like Javier Báez’ no-look tag on a stealing Nelson Cruz and others, have directed attention toward the amazing prowess of the player and to his passion for his country, rather than at the failings of the opposition.

Last night, Dominican fans around me did not boo when Jones robbed Machado of what would have been a crucial home run, instead applauding him with mouths agape. Machado himself doffed his helmet to his regular season teammate Jones, in awed appreciation. 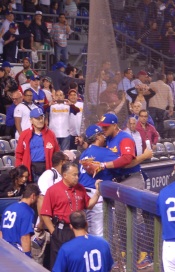 Other games have been similar. Italy was once again one of the stories of the Classic’s opening round with its inspired play, and entered the ninth inning primed to upset a loaded Venezuela. Instead, Miguel Cabrera, arguably the best position player in the tournament, ripped a go-ahead, two-run homer that propelled the South Americans to victory. Italy mounted a valiant comeback in the bottom of the frame, but fell just short, and after catching the final out, Cabrera went over to the Italian dugout to shake manager Marco Mazzieri’s hand and hug the Italians before joining his team in celebration.

Like you, I have witnessed many sporting events, in baseball and otherwise, where fans respond to big plays by the opposition with boos and calls of “You suck!” or worse, but those attending the games in

both Guadalajara and San Diego have been far more focussed on encouraging their teams than booing the opposition. The players appreciate it too. Who in attendance was not struck by the Puerto Rican players running to cheer on their fans after winning Pool F? Even the umpires have benefitted from the positive atmosphere as well, as only a handful of plays have provoked disapproving comments.

Rather, stadiums have rocked with chants of “USA! USA!”, the beating drums of Puerto Rican fans, and the dancing, plátano­-holding Dominicans. More common than jeers have been calls of “You can do it [player]! We believe in you!” or “Let’s go, [country]!” Italian fans have laughed at the antics of the hip-shaking México gorilla, Venezuelans have sung along to mariachis, and Dominicans have traded their straw hats for American cowboy hats.

“We’ve got great guys, both pitchers and position players, and when you got the fans behind you, it makes it that much more fun,” explained USA’s Josh Harrison to me. “It’s no different than during the regular season where our fans pull us through, but this is a little different because we’re playing for Team USA and it’s a country thing. The country puts its differences aside and it’s a little more special sometimes when you get out there and it’s like everyone forgets their affiliate—we’re playing for one thing, and that’s this country.

In every game, whether it has been a thriller won in the late innings or a rare blowout, the mood has been entertaining and positive. The Puerto Rican and D.R. clubs, in particular, have launched some amazing celebrations, with benches emptying in delight in the first inning, and players like Francisco Lindor jumping with pure joy, but in all of these festivities, the focus has solely been on the achievement, and never to rub it in the other team’s face. No team has taken exception, for they understand that when Stanton tugs on his jersey or Lindor and Correa whip the ball back-and-forth before tossing to the pitcher, that they are doing it for the love of the game and the pride in their country.

“What combination of Correa, Lindor and 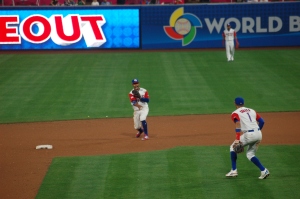 Baez, and any time in a lineup in the same team, in the same infield, we are enjoying it,” expressed Puerto Rico manager Edwin Rodríguez. “Puerto Rico, Latin America and the U.S. and the whole world is enjoying it, and we all saw why. It was so much the defense of these three people; it’s awesome. They are young athletes who are very agile, and we saw why. You enjoy looking at those guys move around in the infield.”

Without exception, every player to which I have spoken has pointed out what an honour in it to wear his nation’s colours and how much it motivates him to win for his countrymates. Managers, especially Rodríguez and Italy’s Mazzieri, have commented at how selfless their players are in understanding why they are on the bench, or offering to play out of position.

“I’m just proud of each one of those guys out there, the coaching staff, my players. I think we gave all out, and I hope that people watching from the stands appreciated that because these guys, they’ve been all out,” concluded Mazzieri. “They played with their heart, and not only with their heart, their souls and everything. We are pleased with our performances. We’re not so pleased with the outcome, but that’s sport. So, we will go back home and be proud of what we showed.”

The passion has served to motivate and inspire the teams, while making for entertaining baseball for the fans. When one is playing to give one’s nation bragging rights as the best baseball-playing country, every play matters, each at bat can change the game, and the other teams are all worthy competitors. As a result, teams have all played with far more panache during the regular season. 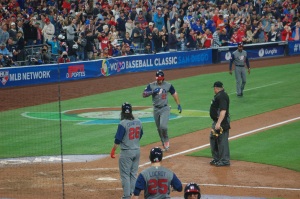 The final round will see four very different styles of baseball, and four unique baseball cultures. Japan is known for sound fundamentals and thoughtful players, with fans that never stop singing and cheering. Puerto Rico brings with it the most dynamic and expressive team in the tournament, with an audience to match. The Netherlands has a slugging, athletic lineup that realises fully that they are representing not only a nation, but an entire continent. United States players are aware of their club’s underperformance in Classic history and its tepid reception stateside, and are keen to reverse both.

One thing all will have in common, though, is respect for the game and for each other, and 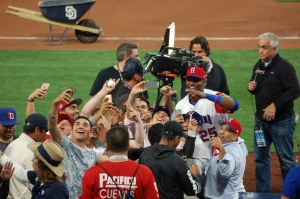 the final three games of the Classic should be just as compelling as the initial two rounds. There will be much more excitement and a new world champion, and we will be on the ground at Dodger Stadium for all three, bringing you more from the players, managers, and game action @extrainnings_bb.