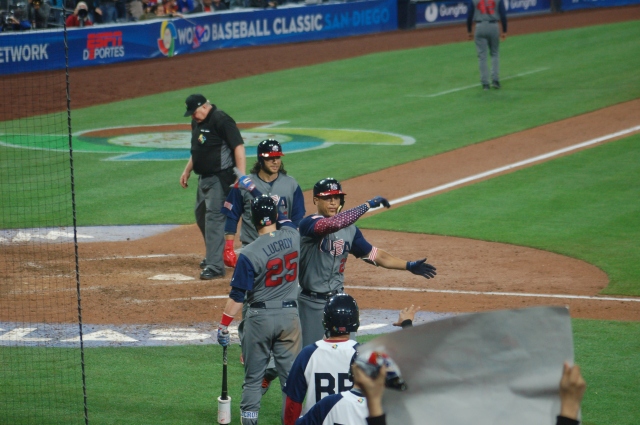 SAN DIEGO, Calif. – It was win or go home for the United States and the Dominican Republic, and the game delivered on the potency of its premise as it took a titanic two-run homer by Giancarlo Stanton and a leaping Adam Jones with an over-the-wall grab of a Manny Machado blast for Team USA to advance to the World Baseball Classic’s Final Four. The 6-3 game ended with fireworks, but the sold-out crowd at Petco Park had seen plenty of explosive action already.

It was the Dominican Republic who got the dogfight started. Robinsón Canó ripped a double that scored Machado, who had reached on an error, and came home himself on a Carlos Santana safety.

Neither nation scored in the second, but the United States tied the game in the third. Stanton and Jonathan Lucroy started with singles, and Ian Kinsler plated Stanton with a groundball that erased Lucroy. With two down, Christian Yelich laced a two-bagger to centre, and it was a 2-2 game.

After a rough start, Danny Duffy settled down and finished with four-plus innings of two-run ball. Dominican starter Ervin Santana, added to the roster especially for the second round, did not last as long, giving up four runs on six hits in 3 2/3 frames.

The game remained 4-2 until the bottom of the seventh, though each side had multiple runners on in the middle innings, including a huge missed opportunity by the D.R. in the fifth, when Pat Neshek worked out a jam that had runners on second and third with only one down.

In the Dominican half of the seventh, Machado crushed a ball to dead centre that had Adam Jones sprinting to the wall. With no hesitation, the new Captain America leaped off his left foot and seemed to soar upward, robbing Machado of a surefire homerun with his glove well over the wall. Statcast metrics showed that the ball would have been a home run 94 percent of the time.

“I’m still in kind of shock that I even got to that ball,” remarked Jones after the game. “I mean, off the bat I’m just like this ball’s hit really far, so just keep going, keep going. You know this California air’s going to slow it down, and just never quit. That’s just the style I play with. I don’t mind running into a wall or two. I just kept going after the ball, and I’ve seen the replay after the game, and I went for the catch, like…”

The next batter was Canó, and he backed up his teammate by blasting a ball out of left field, though Christian Yelich made an impressive effort to steal a second home run, but the roundtripper drew the Dominicans within one.

Sam Dyson would come on to pitch for the United States and got two easy outs, but the one-run lead seemed precarious going into the eighth. Fortunately, Andrew McCutchen delivered after a free pass to Yelich and a plunking of Eric Hosmer, stroking a two-run double to right centre to make the score 6-3.

Dyson would get the D.R. 1-2-3 in the eighth, as would Jumbo Díaz when called upon for the U.S. ninth. Luke Gregerson then slammed the door with a perfect ninth, and the United States celebrated in front of a crowd of 42,003, most of which seemed to be chanting “USA! USA!”.

“Atmosphere was great. It was huge,” remarked Andrew McCutchen. “Miami had a huge crowd there, being in the Dome made it a little louder. But, you know, I felt like we had more of the advantage here in San Diego.”

The victory sent the United States to the final round of the WBC for only the second time ever, with the other coming in 2009. As if the win needed to be any sweeter, it exacted revenge over a club that had come from behind to defeat the Americans only eight days earlier in Miami. Meanwhile, the Dominicans finished 4-2 and are denied a chance at back-to-back crowns.

Duffy earned the win and Gregerson the save, and the US bullpen combined for five innings of three-hit, one-walk, one-run ball. Santana took the loss for a Dominican team that left eight on base and was 1-for-11 with runners in scoring position. It also wasted a 3-for-4 day by Gregory Polanco, who hit .579 in the tournament.

The Classic’s final four has a representative from four different regions, as Asia (Japan), Europe (the Netherlands), North America (USA), and the Caribbean (Puerto Rico) all qualified teams.

“I mean, I think it’s unbelievable. It just shows that this game is global,” commented Jones. “Obviously, it’s America’s pastime, but it just shows that there’s good baseball all across the world. The Caribbean, they play terrific baseball. Like I said, I said in the first round, Colombia, they’re going to be a force to be reckoned with in the coming years, because they put out a good product. Like I said, the Netherlands, they’re great. You see Team Italy, Team Israel. This game is global, and it’s great to see the diversity in this game.”

After a day off, the Netherlands and Puerto Rico will do battle on Monday night in Dodger Stadium, while the United States and Japan will do battle a day later in a rematch of their 2009 semifinal game that saw the Asian nation win, 9-4. Both games start at 6 p.m. PDT (2 a.m. GMT). Extra Innings will have interviews, live coverage, and photos @extrainnings_bb.