Puerto Rico Cruises Past Italy and into WBC Round Two

GUADALAJARA, México – Puerto Rico left no doubt that it is a World Baseball Classic favourite with a 9-3 win over a hard-fighting Italian team. Carlos Correa hit another huge home run and José Berrios showed why he is one of baseball’s top pitching prospects in an electric performance by Puerto Rico.

In a marquee matchup of pitching prospects, Italy once more got off to a fast start thanks to John Andreoli. The Cubs’ minor leaguer followed a Brandon Nimmo walk with a long home run to centre off Berrios to give Italy a quick 2-0 lead. Andreoli homered and drove in the mercy rule runs against México and tied the game with a RBI-single versus Mexico.

Italy sent Indians’ up-and-comer Luís Lugo to the mound and, like Berrios, immediately got into trouble. Ángel Pagán led off the bottom of the first with a double into the left field corner and scored on a two-out single by Javy Báez.

Drew Butera hit his second home run of the Classic in the bottom of the second, and it appeared that Italy would be all Puerto Rico could handle. However, Lugo allowed the first three batters to face, with the third a RBI-single to Kiké Hernández, making his first appearance of the tournament. A second run would score on a funky 4-3-6 double play to tie the game at three.

With his team back in it, Berrios quickly adjusted and looked utterly dominant in his final three frames. The 22-year old righthander retired the final 10 batters he faced, striking out five of them. More impressively, four of those Ks saw batters stare at strike three.

Puerto Rico gave its young pitcher all the help he needed, knocking out Lugo in the third after a leadoff walk by Correa, his second of the game. Carlos Beltrán, who hit .556 in the first round, drove him home with a double. 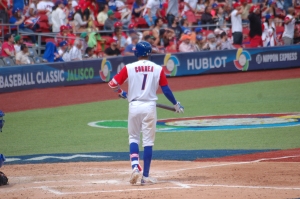 Correa put the nail in Italy’s coffin an inning later, crushing a tape measure three-run homer that the young star paused to admire, flipping his bat calmly before trotting around the bases. With the margin at 7-2 and Berrios cruising, the rest of the game was all Puerto Rico.

Back-to-back triples by Mike Avilés and Hernández and a sacrifice fly to open the fifth put the score at 9-2, and Puerto Rico coasted from that point. Hiram Burgos followed Berrios with three strong frames and, at one point, Puerto Rican pitchers set down 15 in-a-row. Italy went without a hit between the second and ninth innings.

The impressive win by Puerto Rico left them undefeated in three games at Estadio de los Charros and was its second win in two tries against Italy in the WBC.

Berrios, who appeared as a teenager in the 2013 Classic, earned the win, scattering two hits and a walk over five innings, allowing three runs and striking out six. Berrios’ six Ks set a new Puerto Rico WBC record, breaking Burgos’ mark of five against the Dominican Republic in the 2013 WBC title game (a mark he shared with Javier Vázquez [2006] and Ian Snell [2009, twice]).

I asked Berrios after the game, “How do you feel like you’ve changed since you played in the last WBC?”

“I was a guy at 18 years old playing with a lot of older guys,” replied Berrios. “That year everything was going so quickly. This year, I have good relationship with all them and have had four years to grow.” 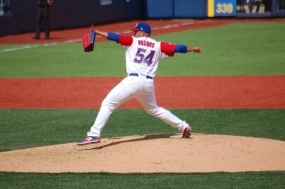 Burgos added to his accomplishments as a member of Puerto Rico with three scoreless innings in which he allowed only a base on balls while whiffing one. The righty is the all-time leader for Puerto Rico in WBC innings (20 2/3), strikeouts (18), and ERA (0.87). Miguel Mejía, an eight-year minor league veteran, hurled a scoreless ninth.

Hernández led the team in hits, with three, driving in two. Mike Avilés, Francisco Lindor, and Javy Báez all had a brace of hits, while Correa reached base three times. Italy was held to only three hits and two walks.

“Every game, the offense was there, and the pitching was there, the defense was there,” remarked Puerto Rico skipper Edwin Rodríguez. “So we have a very good balanced team in the defense and the offense. We have a very good combination of veteran players and young players with a lot of energy. They are very committed to what we’re trying to do here, and they showed that on the field. So we are very confident moving forward.” 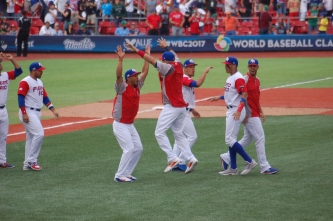 With the win, Puerto Rico’s next game is set. It will take on the Dominican Republic in a rematch of the 2013 WBC Championship Game on Tuesday in San Diego at 6 p.m. local (2 a.m. GMT).

“It is good because we will get there rested,” noted Rodríguez. “All of our arms will be rested, and you cannot lose sight of the fact that this is Spring Training for a lot of players, so those days of rest help a lot.”

On the other hand, the loss by Italy made it unlikely they would advance to the second round despite an impressive effort that included more home runs than all three previous Classics combined.

“Well, I’m just proud of each one of those guys out there, the coaching staff, my players. I think we gave all out, and I hope that people watching from the stands appreciated that because these guys, they’ve been all out,” concluded Mazzieri. “They played with their heart, and not only with their heart, their souls and everything. We are pleased with our performances. We’re not so pleased with the outcome, but that’s sport. So we will go back home and be proud of what we showed.”

Mazzieri announced his retirement from managing earlier this year, and the final question of the press conference asked him to reflect on his career. The veteran leader was visibly emotional as he looked down and collected his thoughts, needing a moment to compose himself.

“Well, it’s not about my career. It’s about all the players that played for me, because wins and losses are in the books, but the emotions and the feelings, it doesn’t matter 20 years from now, they will be there forever,” shared Mazzieri to a room visibly moved by his comments. “It’s about them, it’s not about me. I want to thank all of them through these 10 years that we had in different events and competitions because they made it special.”