Ross and Poole’s Efforts Not Enough against Edinburgh

WARRISTON FIELDS, Edinburgh – On a picture perfect day for baseball, Durham University jumped out to an early lead against a combined Edinburgh baseball side, but poor defence and less than stellar bullpen work led to a 12-10 loss. The nine inning contest was the longest of the season for the Palatinates (7-3-3 on the season) in their first season since re-forming. 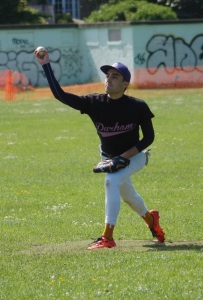 Sam Ross had his best effort of the year on the rubber, starting the game and pitching five strong innings. Durham supported him with single runs in the first and third, with the former coming after Ross led off the game with a safety and was later driven in on a groundball from Andrew Poole. Ross sparked the second run with another single to lead off an inning, and he would score on a groundball from Will Zucker.

Edinburgh would score an unearned run in the bottom of the third, but Durham added to its advantage in the fourth against Scottish hurler Callum, who pitched extremely well. Gabriel Fidler led off with a chopper to the left side and sprinted down the line, beating the throw by half a step. As an encore, Durham’s starting centerfielder would steal second and 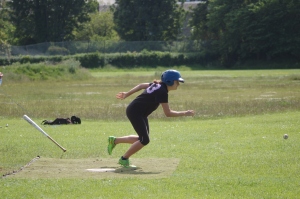 take off for third, easily making it on a textbook sacrifice bunt expertly placed by Lizzie Robertson, the first for the team in 2016. Jenny Laurence earned her first career RBI with a bouncer to the right side of the mound to score the racing Fidler and give the visitors a 3-1 lead.

Ross would keep the advantage at two as flashed a nice mix of two-seam fastballs with late outward break, and a dipping changeup. The Black-and-Purple looked to put the game on ice with a big fifth inning. Zucker was hit to start the frame, swiping second and third and scored on a line drive single from Poole.

After an out, Callum was undone by a series of unlucky plays, as Jack Andrew beat out an infield single to plate Poole. A walk from Fidler put two on, and Callum looked to limit the damage at two after another K, but Laurence notched her first-ever hit with a nifty tapper to the left side of the infield that she hustled out to earn a safety. Andrew would score on the play, and after the throw went long, Fidler took home as well, pushing Durham’s advantage to 7-1.

Ross went out for a final frame, and after a tough base on balls to start, got three quick outs. Durham continued the onslaught, running the total score to nine after RBI-singles from Harry Winter and Andrew.

Fidler entered to pitch the sixth and got an easy popup to start, but a single and a grounder under the glove of the second baseman meant trouble. Fidler battled with the next hitter, but walked him on six pitches, all very near the strike zone. A second base on balls would plate a run, but a strikeout would mean two down.

Durham’s righthander struggled after the punchout, and three walks and a hit batter led to a four-run inning, though only one run was earned.

Durham failed to score in the seventh, and Edinburgh completed their comeback in the bottom of the nightmarish frame. Following a recent pattern, Fidler breezed through the first two batters, the Nos. 5 and 6 in the lineup, but suddenly lost command, and was yanked after three walks and another plunking.

Andrew came in to pitch, and was greeted with a line drive from Gilberto to right field that fell for a single, with the two-hitter for Edinburgh advancing a base after the ball skipped past the fielder. A booming double from Ren plated another, before the second reliever for Durham got a final out.

The visitors suddenly faced their first deficit going into the top of the eighth, 10-9, though Zucker looked to start a one-out rally with a booming double to right centre. He would manufacture a run by stealing third on the next pitch, coming all the way home on an errant throw. With the score tied, Poole looked to keep the rally going, beating out a dribbler down the left side and pilfering second and third. It was nothing doing for the next two batters, and the score was deadlocked going into the bottom of the frame. 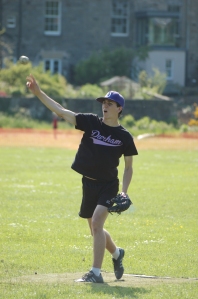 Edinburgh started the eighth with two walks against Andrew, and captain Zucker dipped into his pen, this time bringing out Ross for his second appearance of the game. The righty offered a free pass to the first batter, but got a strikeout of the leadoff hitter, but it was Gilberto who would prove the hero again, stroking a double that scored one, with another joining on an errant throw. Ross would finish with another K, but the hosts had taken a lead they would not relinquish, 12-11.

James, the fourth pitcher of the day for Edinburgh, would enter and had his best performance of the year, giving up a single to the red-hot Ross, but then getting three quick outs for his first career save.

“It was the first nine inning game for most of the squad and we swung the bats well,” concluded Zucker, Durham’s skipper. “Gaining experience against non-university clubs will help us with our goal of being the best university team in Britain.”

In only his second start of the year, Callum earned a no-decision, but impressed with five innings of eight-hit, eight strikeout ball. He walked one and hit two, giving up seven runs, five of them earned. Ten-year old Weston made his pitching debut in the contest, looking surprisingly good against Durham, who score two unearned runs against him in an inning, getting a whiff in the process.

Gilberto was the hitting star for Edinburgh, going 2-for-5 with two RBI, reaching base four times. Edinburgh secured only six hits against Durham pitching, but took 15 free passes, including three from each of the 7-8-9 hitters, who scored eight of the team’s 12 runs.

Ross was 4-for-5 and scored two runs, adding his team-leading twelfth stolen base and pushing his average to .467, second on the team. He received a no decision despite hurling 5 2/3 quality frames, allowing only one earned run on three hits and four walks, striking out four. Fidler (1 2/3 innings, one hit, seven walks, two strikeouts) and Andrew (2/3 frames, four walks, no Ks) also appeared, with the latter dropping to 0-1 on the year. 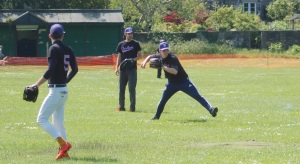 Poole finished 3-for-4 with two RBI to bump his season average to .500, swiping four bags and wreaking havoc on the basepaths. The veteran was a gamechanger on defence, flashing his superb arm and found himself involved in a third of the outs in the game, recording three putouts and six assists, with no errors. Andrew was the only other player with multiple hits, collecting a brace in five at bats. Zucker reached base all five times he came to the plate, officially finishing 1-for-3 with an RBI and four stolen bases. Fidler reached base twice, scored twice, and also stole two bases.

The Palatinate baseballers will continue their season-ending road trip against Glasgow Comets and Glasgow Galaxy tomorrow, 19 June. The doubleheader begins at noon at Glasgow’s Tollcross Park, and Durham will hope to end a five-match winless streak.

Extra Innings UK covers baseball around the world, focussing on the sport at the national team level, with features on prominent players, scouting reports, and occasional breaking news. We are fully credentialled by MLB and have covered the World Baseball Classic, continental championships, and the U.S. minor leagues.
View all posts by Gabriel Fidler →
This entry was posted in British University Baseball, DU Baseball, Uncategorized and tagged British University Baseball, DU Baseball, Edinburgh, Scotland. Bookmark the permalink.