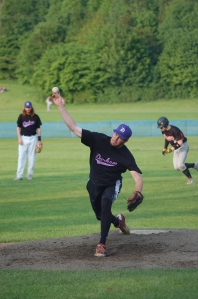 NEWTOWNBREDA, Northern Ireland – Despite solid pitching from Marcus Helland and a stellar defensive effort, Durham University fell 4-1 to the Belfast Buccaneers in nightcap of the Ulster Invitational Tournament. The loss dropped the Palatinates (7-1-2) to fourth in Group A after an earlier tie to Dublin Spartans.

Ulster entered the game heavily favoured in the first group and did not disappoint with Jon Carter on the mound. Carter, a submarining lefty, matched Helland with zeroes in the first, before UIster, batting as the visitors, pushed across two runs in the second.

Darwin Sánchez walked to lead off the frame and advanced to third on a wild pitch and a stolen base. Alex Mancell dribbled a groundball that he just beat out for an infield hit, and Sánchez scooted home on the play. Mancell stole second and third before crossing home plate on a wild pitch before Helland would strike out the side looking. 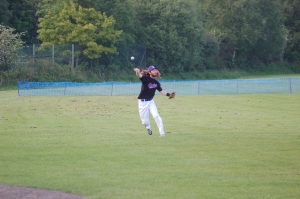 Jones fires to first for the out.

Carter and Helland would each throw scoreless frames before the Black-and-Purple finally broke through against the Bucs in the third. With one down, T.J. Garske worked his second walk of the day and stole second. Brad Jones followed with a grounder to second that the second baseman bobbled and threw wildly to first, and Garske read the play well, racing home to put Durham on the board.

A hit batter and a walk would load the bases, but Belfast would get out of the frame after the Bucs’ catcher Alex Linderman picked Jones off from third.

Neither side would score in the fourth, but Belfast cobbled together a rally in the game’s final frame. With one down, leadoff hitter and tournament chair José Santos walked and swiped two bags, setting Carter up for a RBI-single. Terry Rossbotham would plate another insurance run with a booming RBI double to left centre to make the score 4-1, and it was that margin that the Palatinates faced in the bottom of the fifth. 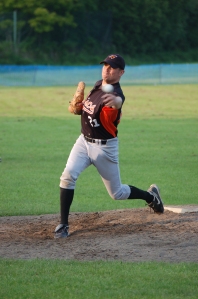 Carter stayed in the game to finish the victory and got Durham 1-2-3 to preserve the 4-1 win for the Bucs, who finished the day undefeated in three contests. The southpaw allowed only one unearned run in five frames, giving up a single hit to Sam Ross and walking four. The veteran hurler whiffed eight.

Helland (1-1) was the unlucky loser, going the distance and allowing four runs on five hits and five walks. The righthander did strike out four, throwing 90 pitches in five solid innings.

The loss ended Durham’s undefeated streak at seven and leaves the Black-and-Purple battling for a top two spot and the right to advance to the semifinals. The first-year university side will need a pair of wins against Glasgow and Tonbridge for the right to exit the group stages, with the uphill battle starting with a 7:30 a.m. skirmish with Glasgow before concluding Group A with an 11:30 match with Tonbridge.

Stay tuned to @durham_baseball on Twitter and Extra Innings for all the coverage of Durham at the Ulster Invitational.

Extra Innings UK covers baseball around the world, focussing on the sport at the national team level, with features on prominent players, scouting reports, and occasional breaking news. We are fully credentialled by MLB and have covered the World Baseball Classic, continental championships, and the U.S. minor leagues.
View all posts by Gabriel Fidler →
This entry was posted in British University Baseball, DU Baseball, Europe, Ireland and tagged British University Baseball, DU Baseball, Europe, Ireland, Ulster. Bookmark the permalink.