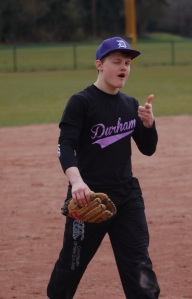 The black-and-purple got off to a great start as Harry Winter crushed a ball to the fence in the left-centerfield gap for a game-opening two bagger. Nico Trompetas, whose plucky running plated a much-needed run in the first game of the day, stroked a single to left and Winter trotted home to put a run on the board for Durham.

With Joe Proffitt batting, the Carnegie hurler looked rattled, throwing one that reach the backstop and Trompetas took off for third. With no chance of catching the fleet-footed first-year, Leeds’ catcher hurled the ball to third and the throw sailed under the glove of the third sacker to move the margin to 2-0.

Free passes to Proffitt and Cameron Richardson put two runners aboard with no out, and Harry Mayes reached on a fielding miscue by the embattled third baseman to score Proffitt. The run-scoring threat would end with an out on the bases and back-to-back full count strikeouts, with the umpire ringing up Findlay Caplan and Fidler on pitches over the shoelaces. 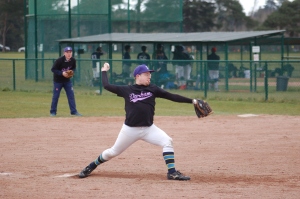 Fidler took the mound seeking redemption after a wild debut against University of East Anglia for Durham’s first team the day before. The righthander looked much more comfortable in his second start, though with a porous defence, five runs crossed the plate in the first before the scoring was extinguished. Only one run was earned as the only hit, a double over the head of Alex Wilson in left, and three errors caused Leeds, who finished in second place at the autumn championships, to take a 5-3 lead it would not relinquish.

The Palatinate batters worked two walks, but the first was erased on a very delayed steal attempt. Winter stroked another fly ball to the warning track, but this one was caught by the centerfielderand the double play was completed as a quick throw in completed the unusual 1-2-3 inning.

Fidler took to the hill with similar results in the second, as two errors, a double that sailed over an outfielder, and a walk saw three runs cross the plate. With the scores, the purple-and-white increased their lead to 8-3 through two.

Another fly ball double play ended any chance of Durham scoring in the third, but Fidler looked calm and collected to start the third, getting a high popup to Trompetas at second base and catching the next batting looked for his third strikeout.

DU Baseball’s president ran into trouble after the two easy outs, walking the third batter up, but looked to get out of the inning unscathed after inducing a fly ball to centre. A dropped catch would lead to a run, but Winter leaped with arms outstretched to nab a line drive to shortstop and end the inning. The play saved a run and robbed LBU’s batter of a double.

A leadoff single by Harry Mayes got Durham off to a good start in the fourth, but the rally was quickly stopped. Mayes stole second, but ran past the bag, and took off for third on the throw, easily being tagged out with another play at third. Two more batters stared at generously called strikes to end the frame. 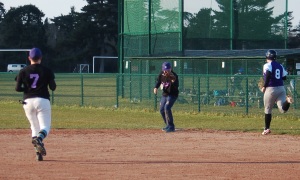 Having thrown almost 90 pitches, Fidler went out for a final frame, but tired quickly despite inducing three straight groundballs to start the fourth. The second went for a fielding error and Leeds Beckett took advantage, working a six-pitch walk and then following with two safeties and another free pass, scoring four runs before Fidler buckled down to induce a weak grounder back to the rubber. After a toss to first, the frame finally ended with the score 13-3. 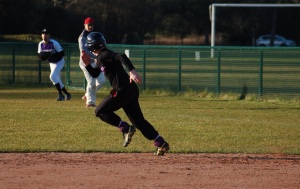 LBU’s starter started the final frame with two more punch outs, running his total to six on the day, but Durham had one last glimmer of hope after Winter blooped a two-bagger down the right field line. The skipper was the unlucky recipient of a brilliant pickoff move, and the inning ended abruptly. 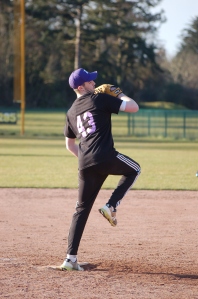 Ollie Clawson came in for his pitching debut in the bottom of the frame, and struggled to adjust his bowling technique to the diamond with the first two batters taking free passes. The southpaw’s motion finally clicked, however, and the next two batters waved feebly at fastballs on 1-1 counts before looking at Clawson’s surprising breaking pitch. After the second, the game ended via time limit, and LBU were the victors.

Fidler (0-1) took the loss, throwing four innings and allowing 13 runs on five hits, six walks, and a hit batsmen. Only three of the runs were earned, however, and the righty notched three strikeouts.

Winter was the hitting star, going 2-for-3 with a pair of doubles, narrowly missing a third, and scored once. Trompetas reached base in both plate appearances on a single and a plunking, with the team reaching base nine times.

Durham’s seconds dropped to 0-4 at nationals, though it is worth noting that the Palatinates were only the side to field two teams. The team will take a quick break for Easter before returning with more action later in spring.

Extra Innings UK covers baseball around the world, focussing on the sport at the national team level, with features on prominent players, scouting reports, and occasional breaking news. We are fully credentialled by MLB and have covered the World Baseball Classic, continental championships, and the U.S. minor leagues.
View all posts by Gabriel Fidler →
This entry was posted in British University Baseball and tagged British Baseball, DU Baseball, Durham, Durham University, NUBC, NUBC16. Bookmark the permalink.