BRNO, Czech Republic – The Netherlands, ranked fifth in the world, managed just enough offence against NO. 11 Italy to clinch home field advantage in the 2014 European Baseball Championships. It leaves the Orange as the only undefeated side, but the two heavyweights will battle again tomorrow afternoon for the title.

The game started with an unusual moment as rain knocked the audio system temporarily out of commission. A few minutes’ silence ensued, before the noisy Dutch supporters began singing their national anthem in unison, to initial looks of amusement but thunderous applause by the end, particularly from the players. The P.A. announcer then asked if anyone from the Italian could help them out. The Italians, who were a bit more scattered in the crowd, joined reluctantly at first, but buoyed by the press contingent, gained volume. The entire stadium cheered their conclusion, and the players took the field.

“It was fantastic,” reamrked Dutch Head Coach Steve Janssen. “I thought it set up until I hear the announcer ask the Italians to sing. [It’s moments like this] that makes baseball so special and so beautiful.”

Mike Bolsenbroek and Yosmel Rivera both pitched very well in the cool, damp evening at Draci Brno’s home stadium in front of a surprisingly strong crowd given the occasional rain showers. Both starters had 1-2-3 opening frames and Rivera continued his good start through two batters in the top of the second before Yurendell de Caster launched a massive homer to left for the Netherlands.

Italy had a big hit of its own in the third, but the leadoff double by Alex Sambucci was wasted as Bolsenbroek went three-up, three-down to end the frame.

In the third, the Orange threatened to add to its lead after Rangers’ farmhand Nick Urbanus looped a triple into the right corner, but Rivera struck out the side to keep the score at 1-0. Neither side would get a hit again until the fifth. 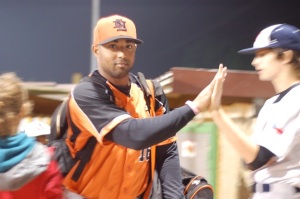 Dashenko Ricardo reached to start the fifth as Italy’s first baseman Alex Sambucci stepped off the bag on a good throw from Alex Liddi on a ball hit down the line. Rivera got Urbanus looking, but Oduber stroked a safety to centre. Hainley Statia would then strike a big blow for the Dutch after Oduber’s hit, striking a towering three-run homer to left to make it 4-0.

After an error & a walk, Rivera would exit, but another error with Nicholas Morreale loaded the bases with 1 down. Morreale would bear down on de Caster and get a tapper to the mound and a 1-2-3 double play, but the score stood at 4-0 at the end of the frame.

Despite hits by Gabriele Ermini & Marco Sabbatini in the bottom of the frame, a double play would get Bolsrenbroek out of the fifth as momentum shifted firmly to the Netherlands.

Sharlon Schoop curled a triple into the right field corner against Morreale in the sixth, but the righty got a strikeout and two flyouts to escape. Bolsenbroek continued his dominance in the latter half of the frame with another 1-2-3 effort, adding two strikeouts.

With one down in the seventh, Curt Smith lined a two-bagger down the left field line and moved to third after Gianison Boekhoudt hit a ball off pitcher’s glove. Smith scored on a lofty fly ball to right field to make it 5-0 Orange.

Bolsenbroek seemed to get stronger as the game progressed, getting two more whiffs in the seventh after having only recorded one in the first four innings. Morreale matched the Dutch righty the rest of the way, finishing with 4 2/3 innings in relief, giving up only one earned run on three hits, no free passes, and a strikeout. Yomel Rivera (1-1) deserved a better fate as he gave only one true line drive, with his breaking ball at its peak, but gave up a number of bloop hits. He totalled 4 1/3 frames, three earned runs, five hits, two walks, and five Ks.

The real pitching hero was Bolsenbroek (2-0), who set down the final 13 batters, scattering only three hits and two walks. The righthander whiffed six, tossing 116 pitches in the effort, continually leaving Italy off balance.

Bolsenbroek was backed by nine base knocks, five for extra bases, and a pair of base on balls by the winning side, who did not commit an error. Boekhoudt was the only player with multiple hits, also drawing a walk. Statia’s blow was the difference maker as he had three of the Netherlands’ five RBI.

“This game may have only been for home-field advantage, but we had some things to put straight,” explained Coach Janssen. “The last two editions of the tournament have ended with us losing twice to Italy and that was still on our minds. We play to win, we play for pride, passion, and the love of the game.”

“We have to start all over again tomorrow, but it having the win is a good feeling,” concluded the Orange’s skipper. “[However], I was always taught by my parents to never wake a sleeping dog. They’re playing for their country and for pride to and they’ll be ready to have revenge. We have to prevent that by starting strong and maintaining focus.”

The victory ended a 20-game winning streak at the European Championships for Italy, who will attempt to turn the tables tomorrow at 2 p.m. GMT in the title game. Track all the action at http://www.baseballstats.eu/2014/brno2/schedule.php and follow Extra Innings on Twitter for live play-by-play and analysis.