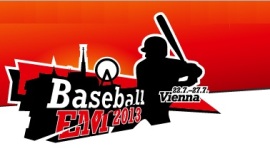 VIENNA – Austria took an early lead on home turf in the B-Level European Championship Vienna Pool, but Russia came back in the ninth to take the lead and then held on through a nail-biting ninth inning to qualify for the 2014 European Championship. The 3-2 final improved 13th-ranked Russia’s record to 5-1 in the qualifier, dropping No. 18 Austria to 4-2.

Led by youngster Andrey Lobanov on the mound and the bane of the Austrians, Maxim Ayztaluin, Russia out-pitched and out-hit its hosts, despite a dogged performance from veteran hurler Christian Tomsich.

Neither side threatened in the first frame, but each had a chance at breaking the shutout in the second. Tomsich worked himself into a jam in the half of the frame, giving up a one-out walk and then throwing wildly to first to allow the run to move over. Another miscue, this time by shortstop Claus Seiser, put two runners on, but Tomsich induced a grounder and a strikeout to end the innings.

Lobanov, only 23, then ran into trouble himself. Felix Zimmerle, who had taken the hill the day before and pitched a gem to deliver Austria a vital win, singled to left field with two out. Lukas Scheicher, in his first start of the tournament, followed with a single to centre.

After the ball dropped, Victor Samchuk bobbled the hit and Zimmerle, who had been off with the sound of the bat, scored all the way from first. Seiser could not plate Scheicher, as Lobanov produced a groundball to stop the rally.

Russia’s starter once more faced a predicament the following inning. Lobanov plunked Fabian Hirnschal to start the frame and Austria’s second baseman moved to second on a bunt. The sacrifice worked perfectly as Peter Ferak, the red-and-white’s leading hitter, stroked a one-base hit to left that scored Hirnschal to double the host’s lead to two.

Russia answered in the top of the fourth after Aleksandr Maksiakov laced a one-out single and got in Tomsich’s head. After a pickoff throw was unsuccessful, Tomsich thought about another and was instead called for a balk. A groundball gave Maksiakov another base and with two down, Daniil Khomyakov knocked a hit to right centre and Russia was on the board.

Both pitchers worked around hits in their next inning before settling down in the middle frames. Neither club could string together a rally until the bottom of the seventh, when Scheicher and Seiser both bounced balls to the edge of the infield that they beat out for hits.

With two on and no out, Head Coach Robert Buchelt elected to have Hirnschal lay down a bunt. The sacrifice moved Seiser to second, but Lobanov scampered off the mound and mowed down Scheicher at third. Dominik Talir ran the count full, but Lobanov caught him looking and then worked his way out of the two-on jam on a flyball out.

Home fans knew that the final frame would be an anxious one with a 2-1 lead, and the two sides delivered plenty of drama for the roughly one thousand people in attendance.

Tomsich came out of the dugout to start the ninth despite having thrown 102 pitches. He walked Maksiakov to start, but pleaded to stay in after a coaching visit to the mound. Oleg Semenov forced Coach Buchelt’s hand by stroking a one-bagger to left on a 0-2 count, putting two runners on with no outs.

Veteran Werner Harrasser, at 35-years old the most experienced player on the team, was summoned from the bullpen after two strong relief performances earlier in the pool had seen him throw six shutout innings with five strikeouts. His first pitch was bunted at the mound and Harrasser fielded quickly, getting pinch hitter Dmitry Semenov at first, but moving the runners over.

Miguel Abreu, Russia’s coach, then ordered Victor Samchuk to initiate a suicide squeeze and sent Maksiakov charging in from third. Samchuk, who had dropped two sacrifice hits already in the tournament, missed the pitch and Maksiakov was tagged out.

With two down, it appeared Austria’s fans could release some of their tension, but Samchuk blooped a ball to center that Talir dropped, allowing Russia to score the tying run. A rattled Harrasser then gave up a hit to Kiril Chermonshentsev and up stepped Ayzatulin.

Russia’s shortstop came into the game hitting .227 in the tournament, but that included a 2-for-5 effort with a double and two runs scored against Austria. Ayzatulin then proceeded to bang out his fourth hit of the title contest, scoring Samchuk with the unearned and go-ahead run. That was all for the visitors, but they had taken the 3-2 lead.

Lobanov came out to finish the complete game with a pitch count of 113, but struck out Zimmerle to start the inning. Scheicher walked on four pitches and Seiser dropped down a bunt to put Scheicher in scoring position.

Down to its final out, Austria sent up Richard Alzinger, who tapped a ball through the right side that advanced Scheicher, but was fielded by right fielder M Monakhov before the lead runner could score. Lobanov reached back for just enough to then retire the final out on a grounder to shortstop, and Russia claimed the Vienna Pool title. The victory qualifies Russia for the 2014 European Championship. 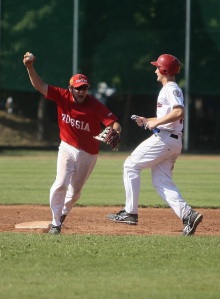 Harrasser (1-1) took the loss in his one inning of work after Tomsich pitched eight-plus frames, surrendering two runs on eight hits and three walks, whiffing four. Lobanov (1-0) struck out nine in as many innings, allowing seven hits, two walks, and one earned run. He finished with a 0.87 ERA for the tourney, striking out 8.7 batters per nine innings.

Ayzatulin had four hits in five trips to the plate, improving his average to .600 against Austria despite a .176 mark against all other nations. Maksiakov reached base three times, once on a hit for a Russian side that had 10 hits and three walks, though the 2-3-4 hitters were just 1-for-12.

Only Scheicher had a brace of hits for Austria, though Seiser reached base twice. Ferak, the red-and-white’s catcher and leading hitter was only 1-for-4, though he did throw out 3-of-5 runners behind the dish.

Russia will join Great Britain and the rest of the qualified field in the Czech Republic for the 2014 Euros. Austria will have to wait for the 2015 B-Level Euros for another shot at the top level of continental play. Extra Innings will have complete coverage leading up to the continent’s championship and during the quest to crown Europe’s top baseball-playing nation.

Extra Innings UK covers baseball around the world, focussing on the sport at the national team level, with features on prominent players, scouting reports, and occasional breaking news. We are fully credentialled by MLB and have covered the World Baseball Classic, continental championships, and the U.S. minor leagues.
View all posts by Gabriel Fidler →
This entry was posted in Austria, Europe, European Championships, Game Recaps, Russia, Tournaments and tagged Austria, Österreich, CEB, Europe, European Championships, Euros, Russia. Bookmark the permalink.